Valentine’s Day was celebrated by 45% of consumers this year, according to Kantar; 36% celebrated with a partner, while 11% celebrated with friends or family. In the last few years, the event has diversified to include more than just couples, with ‘Galentine’s day’ now growing as an occasion. Valentine’s Day is a day to indulge, with 20% of Valentine’s meals being eaten for ‘treaty’ reasons. However, it's clear that it is important to spend less time in the kitchen, as consumers are four times more likely to choose a meal that requires less cooking. People aged 25–44 were more engaged with Valentine’s Day this year than last year – and were almost twice as likely to have a romantic meal than those in older age groups.

In terms of value, the red meat sector enjoyed its biggest Valentine’s Day in 5 years, with an additional £13m spent compared to last year, according to Kantar. This increased spend is attributed to average price increases and fewer promotions on red meat, but was to the detriment of volumes, which were down 1.1% on the year.

‘Premiumisation’ in sausages helped to boost processed pigmeat value, which was a big winner over Valentine’s Day. Processed pigmeat sales grew by £8.3m, but there were minimal volume increases.

Primary beef and beef steaks performed well, volume growing by 5.0% and 5.7% respectively. Steaks were even more popular than last year, adding 126 tonnes to the category. All steak cuts were in volume growth. Fillet and sirloin had the biggest uplifts in volume, but also have high price tags, showing that consumers were willing to splash out on their steaks.

There were also big increases for marinades, with sales growth of £1m and volume growth of 16% showing that new flavours and Valentine’s Day-themed packaging can justify a price premium to consumers.

Meal deals featured less this year, but remained important, with an uplift of £16m over the 2 weeks to Valentine’s Day. This year, retailers have been more creative in their meal deals, with add-ons and greater flexibility, including some offering two main courses in a meal deal to make it easier for couples with differing dietary requirements. Competing with new innovations is essential for meat to remain a part of this key meal format.

It is often thought that consumers are willing to splash out or to trade up tiers for Valentine’s Day. However, trade-up this year was focused on cheaper cuts: premium new product development (NPD) and sell-out innovations included heart-shaped sausages and chicken nuggets, which appeared on (and then quickly disappeared from) shelves.

It was a mixed picture for fresh and chilled potatoes. Price drops for both categories were too deep to encourage value growth. Chilled potato sales have been struggling in recent months: hear more in our podcast [link]. However, price decreases did encourage consumers and there were strong increases in volume sales over Valentine’s Day, with growth of 3% in fresh and 4% in chilled potatoes.

Chilled prepared potatoes, such as gratins and dauphinoise, encouraged consumers with quick and easy messaging – because we know consumers don’t want to spend time cooking on Valentine’s Day. According to Kantar Usage, romantic couples’ evening meals tend to be more traditional, with 65% of these occasions in 2019 being British cuisine. This proves that the humble potato still has its place on the plate of those seeking to wow their significant other.

As we have seen in some of the meat categories, premiumisation with a Valentine’s Day theme has been able to increase the value spend on products. NPD within potatoes could also tap into these areas of growth.

This year, dairy felt the love, with many categories seeing both value and volume growth. Consumers treated themselves with cheese: according to Kantar, compared with the 2 weeks to Valentine’s Day last year, volumes were up 5.2% and spend was up 4.2%. Cheese was heavily promoted over Valentine’s Day, with temporary price reductions increasing by 25%, boosting trip volumes. Butter spend was flat, but volume increased by 4% as new consumers bought in to the category and existing customers bought more often.

Valentine’s Day is about treating and £34m was spent on chilled desserts in the 2 weeks to 16 February 2020. However, this was slightly down (-1%) on last year. There were increases in fresh cream sales (up 4.3%) as consumers still indulged in puddings.

In 2021, Valentine’s Day will fall on a Sunday, offering opportunities to tap into more meal occasions. Advertising around breakfast in bed could do well, as well as the traditional dine-in options. This could be especially lucrative for traditional breakfast ingredients, such as sausages, bacon, yoghurts and butter. Hash browns could also be an area of growth for potatoes, which have performed well in foodservice over the last year.

By learning from successes in innovation and premiumisation for certain products and applying this to more categories, we could see uplifts in value. Having new offerings within meal deals that include red meat and potatoes could help boost sales. Marinades are still popular, so making sure new flavours are tasty and inventive could encourage consumers to buy the products year-round.

Consumer confidence has recently dropped sharply because of the coronavirus pandemic. Consumers’ confidence next February will have a large impact on whether or not consumers will be willing to spend money on indulging loved ones or whether it will be a more subdued affair. 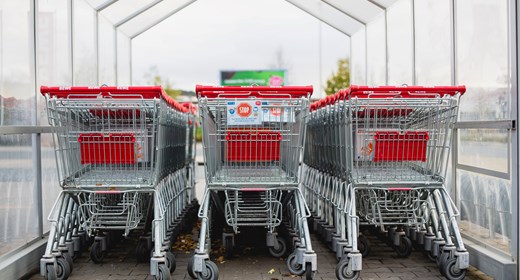 Shoppers scale back this Christmas

All you need is love...and steak