The Early Bird Survey (EBS) takes place each autumn to assess national cropping intentions. It is undertaken by The Andersons Centre, with the help of the Association of Independent Crop Consultants (AICC) and other agronomists.

At mid-November, farmers across the UK intended to plant nearly 10% less wheat for harvest 2020. After a rain-delayed planting season this autumn, farmers intentions were to continue planting wheat as and when the weather allows. Final decisions on switching to spring crops are yet to be determined; however, we can assume that spring wheat will heavily feature. For those already unable to plant winter crops, the intention to move to spring barley and oats may already be made.

The AHDB Early Bird Survey is carried out each autumn to assess national cropping intentions. It is undertaken by The Andersons Centre, with the help of the Association of Independent Crop Consultants (AICC) and other agronomists.

This year’s survey covered 615kha, which represents 13% of the UK area for the crops surveyed.

This year we have seen a prolonged and delayed planting season for winter crops which means that planting intentions remain as changeable as the weather forecast. This year’s survey represents the intentions of farmers across the UK during 1 – 18 November with the majority of responses to the survey in the w/c 11 November.

The unpredictable impacts of the weather over the coming weeks means AHDB will rerun the survey in the new year to ensure it reflects the latest intentions of growers as the winter progresses and weather conditions change. Once Defra have released their final UK production estimates, including regional breakdowns, we will update our current survey with a more detailed regional update.

The survey reports that at mid-November, UK farmers intend to sow a total of 1,645Kha of wheat for harvest 2020. This includes crops in the ground, winter crops still to be sowed through December and January, as well as a large swing towards spring wheat planting intentions.

The area of winter barley intended is also forecast lower at 398Kha, down 12% from 452Kha planted for harvest 2019. However, spring barley is intended to increase to the highest since 1988 at 915Kha, as growers switch to spring crops in an attempt to sow in better conditions after the autumn deluge.

Oilseed rape area is seen significantly down as growers in the UK continue to cut back acreage in response to the damage and yield risk caused by Cabbage Stem Flea Beetle. The intended area sown is forecast down 23% at 406Kha. This is not accounting for any damage during the autumn from pests and weather, and so this area may reduce further as we head through the winter.

The oat area is forecast to increase again for 2020 harvest, with UK growers intending to plant a total of 200Kha of winter and spring oats, a 10% increase year-on-year.

Using the 2019 harvest estimates from the Defra June Survey, the Early Bird Survey percentage changes by region can now be used in order to provide a regional breakdown.

The results remain intentions of UK farmers, as at mid-November 2019, for harvest 2020. The survey will be re-run at a regional level in the New Year.

Source: Defra, The Andersons Centre for the AHDB

1  Northern Ireland was not surveyed, so the forecast UK % change has been applied to 2019 Defra June survey data for NI to generate the 2020 forecast. 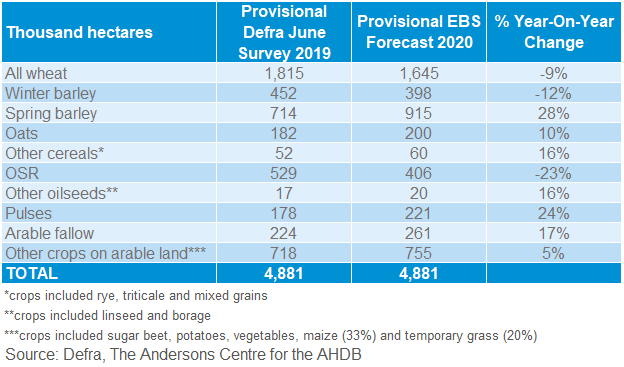 More than 80 agronomists took part in this year’s survey to gather data from over 615,000 hectares of arable land across all regions of the UK.