Free movement of labour between the UK and EU ended on 31 December. The UK Government has started to operate a new points-based immigration system. This system treats migrant workers from the EU and rest of the world the same. In this article we review what this mean for agriculture and horticulture, with suggestions on the action businesses should be taking now.

How important are migrant workers to agriculture and horticulture?

AHDB assessed the potential implication of EU exit on the agriculture and horticulture workforce back in 2016, when we published a Horizon report. Our analysis of official data sources showed that migrant workers make up a high proportion of the total workforce in agriculture, horticulture and the food processing sector. We found that:

We concluded that the EU provided a pool of labour which was willing to undertake work which had become unattractive for UK nationals. Many of the roles filled were seen as physically demanding, dirty and with unsociable hours.

2020 was a challenging year in so many ways. Among the challenges has been the disruption COVID-19 restrictions caused to travel, which has limited the availability of migrant workers. Only a small proportion of the usual EU seasonal workforce were able and willing to take roles in the UK.

The industry’s response to this was to try to recruit UK nationals into the roles they had previously rejected. Pick for Britain a major recruitment campaign was launched with Government supported. The availability of a new source of recently unemployed and furloughed workers (who were given special dispensation to undertake seasonal agricultural work) helped this scheme.

AHDB launched a horticulture labour barometer to provide Government and industry with information on labour requirement and availability at this critical time. The graph below shows that between 71% and 86% of participating businesses were able to source the labour required. 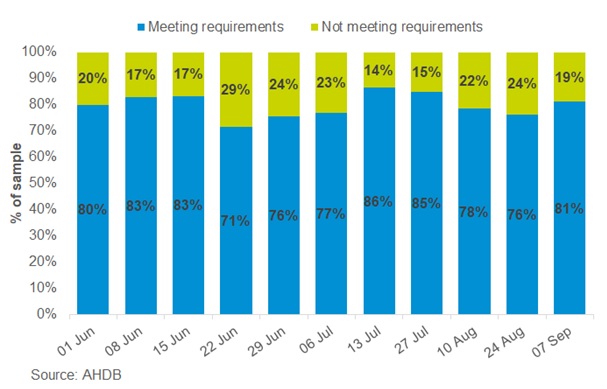 From this we can conclude that the scheme was successful in attracting new labour to the industry. However, anecdotal reports suggest turnover rates were high, with many workers only filling roles for a short period. As such, we would expect there to remain an ongoing need to recruit migrant workers for some roles.

How will roles in the food supply chain fit with the new migration system?

The new points based system offers a number of routes for migrant workers to enter the UK. Of these, the most relevant for year round work in the food supply chain is the skilled worker route. This awards points based on a set of criteria as outlined below:

A key criteria here is the ‘job at appropriate skill level’ requirement. To qualify the Government stipulates that jobs require at least level 3 qualifications (i.e. A level or equivalent). This would cover roles such as farmers, skilled agricultural trades, horticultural trades, farm managers and production managers in food processing.

There is potential for some jobs to attract bonus points due to their presence on the Migration Advisory Committee’s (MAC) shortage occupation list. However, here, the food supply chain will be disappointed to see there are only a few sector roles feature. Notable roles include butchers, veterinarians, veterinary nurses and agricultural engineers as part of wider engineering codes.

However, the Office of National Statistics occupational classification places many occupations in the food supply chain at a lower level. Roles such as farm, horticulture or productions workers would not be deemed as at ‘the appropriate skill level’ by Government to qualify for entry. Many in the industry would argue that these roles are skilled, even though they don’t require a high level of qualifications.

An extension to the Seasonal Workers Pilot

Seasonal farm or horticultural worker and picking roles are not viewed by Government as sufficiently skilled for the skilled worker route. However, on 22 December, the Government announced a Seasonal Workers Pilot for 2021 with an expanded quota of 30,000 places. This represents an increase from the 10,000 quota of last year’s pilot. The Government announcement acknowledges that the new quota will not be sufficient to fill all seasonal roles, highlighting that the recruitment of UK workers from 2020 should continue.

What do businesses need to do now?

There are a number of actions which businesses should be considering: