Mother’s Day was widely celebrated this year as 76% of us treated our mums, according to research by Kantar.

Families were the most engaged with the occasion and those with younger children spent the most. Of those gifting on Mother’s Day, 24% decided to go out for a meal, 21% made a special meal at home and 7% made breakfast in bed. Being together as a family is important to mums, who are driving the growth of ‘together time’ meal occasions throughout the year.

Mother’s Day is always three weeks before Easter Sunday, but, due to the lateness of Easter, school holidays and warm weather, the two occasions merged into one spring-time holiday.

At a total grocery level, we spent as much for Mother’s Day this year as we did last year (£2.2bn) but having a heatwave two weeks later, coinciding with Easter, resulted in record-breaking spend for later in April (link to article). The most special meal of the season remains Easter, but Mother’s Day still enjoys an overall 4.7% sales lift compared with an average week in Special Meal categories.

For meat, fish and poultry (MFP), Mother’s Day sees a 2% uplift in volume sales versus a typical week. As a comparison, both Christmas and Easter see a 17% uplift, highlighting the opportunity to push meat-based meals further at Mother’s Day. This Mother’s Day, despite lamb being highly seasonal, volumes were down 2% in the week leading up to Mother’s Day. However, these declines were not as strong as chicken, which was down 4%. The winner this Mother’s Day, gaining from all other proteins, was fish. Many stores promoted Sunday roast as a way to treat mums.

Accompanying their roasts, many opted for chilled prepared potato products, which saw growth of 2% vs an average week but were down 16% year-on-year as roasts fell overall. Many of the convenience sectors saw declines this Mother’s Day, including chilled main meal accompaniments, chilled ready meals and ready-to-cook lines, as people may have been looking to cook from scratch for their mums, as well as saving on price.

Breakfast items preformed especially well this year as mums view it as the most important meal of the day. Throughout the year, mums are less likely to skip breakfast than the total population. Morning goods (including croissants, buns, pain au chocolat, etc.), milk and butter all saw strong seasonal uplifts. Bacon and sausages saw a decline, however, as families may not have chosen to cook a full English, going for easier options. However, due to the special nature of Mother’s Day, could breakfasts that are more indulgent be an option? 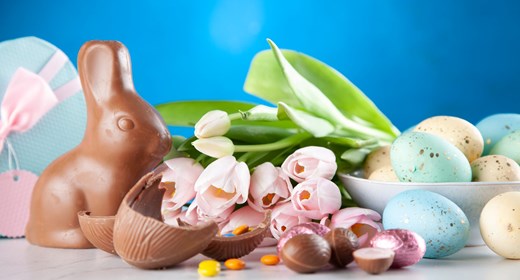 Scorching Easter, a hit for lamb

All you need is love...and steak