Lockdown has impacted our eating habits massively, with more meals being consumed at home. But how has the last few months influenced our need and desire to eat healthy foods?

In our evolution of health report from this time last year, we saw that health was important to 62% of consumers but was only a driver of food choice for 33% at home. Growth of the health market was driven more by ‘managed-led’ health (restrictive diets, for example, low in fat), rather than ‘benefits-led’ health (diets focused on adding, for example, more vitamins). In our webinar in January, we saw that health had been growing since 2015 but had plateaued in 2019.  So how has this changed since lockdown?

According to Kantar, in April and May, there were 2 billion more meals consumed for health compared to the same period last year. Despite these areas of growth, overall health has lost share in total servings, with enjoyment growing at a larger rate, largely due to the need for comfort foods during times of uncertainty. During lockdown, consumers have compensated for the loss of bigger treats such as holidays or big family eating out occasions with smaller treats such as indulging in food for enjoyment. From our consumer tracker* with YouGov we saw that while 22% said they had eaten more healthy foods during lockdown, 29% disagreed.

Has the meaning of health changed?

It is important to remember that health is much more influential in the home. When eating out, people are often looking for more of a treat so health drops down as a priority – with only 7% of meals eaten out of home driven by health needs. Before Covid-19, quality of food and value for money were the top two considerations when choosing where to eat and drink, according to CGA. Now, perhaps unsurprisingly, hygiene/cleanliness has become the most important consideration, with quality and value for money still closely following. Availability of healthy options, remains the lowest priority both pre and post lockdown.

Therefore, with these meals moved in-home due to lockdown, overall, we are eating more foods for health reasons than we did this time last year.

We have seen a return to benefits-led health which grew 13% in April and May compared to last year. Managed-led health also saw growth but only 2% (Source: Kantar)

The increased number of meals eaten in-home has led many consumers to look for new dishes to stop the repetition of similar meals. Those choosing foods to provide a varied diet has increased 40% compared to last year. The other biggest areas where we saw growth were getting a portion of fruit or veg (+22%) and more natural/less processed (+19%). These could feed into the trend we saw for increasing cooking from scratch, which is generally seen as healthier.

Many consumers are looking for inspiration and recipes on google, mainly for the evening meal, with  health being one of the most featured search terms.

Economic uncertainty during lockdown has led to financial concerns for many consumers. This, coupled with price rises in supermarkets, means some people may not have been able to eat as healthily as they would like. According to IGD, 7 in 10 believe it is more expensive to eat healthily, so it’s unsurprising that of those on a tight budget, 15% have cut back on the number of healthy foods they have bought.

There has been no movement on our consumer tracker* for those saying they follow a vegan diet, remaining static at 3%. However, we have seen the number of households buying meat free options drop back over the lockdown.

We have continued to see increased interest in the Keto (high protein, low carbohydrate) diet throughout lockdown, which is a big opportunity to tailor meat and dairy products to this health trend.

According to Mintel, most consumers would prefer to gain nutrients from natural sources. However, this hasn’t stopped the growth in fortified products, with added protein being the number one ‘plus’ claim on new products in 2019. Red meat and dairy could do more in this space as Mintel suggests that 8.6% of high/added protein claims were made by meat substitutes compared to 6% for dairy, 5.1% for fish, 2.7% for poultry and 1.4% for red meat.

As lockdown eases, we expect to see the number of in-home meals ease compared with last month but still be more than last year. Positive health messaging is vital but it needs to complement other key decision criteria such as price, taste, convenience and treating. As we enter a time of economic uncertainty, price and value for money become more important when shopping and taste and enjoyment become bigger drivers of meal choice, so we could see health continue to lose share.

While health can sometimes be less of a purchase motivator during hard economic times, it is still important to remind consumers of the positive health benefits of red meat and dairy alongside messaging around taste and enjoyment as consumers look for foods to meet more and more needs. Continuing reminders of how beneficial these products are as part of a balanced diet will help the industry to remain on the front foot when the economy picks up and health grows as a driver again.

Webinar: How is 'health' evolving? 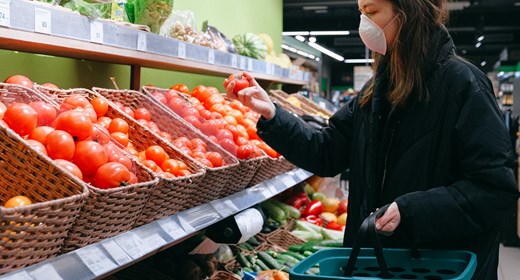 How lockdown has influenced the consumer landscape