Assess the risk of fusarium mycotoxins and record the score on the grain passport. 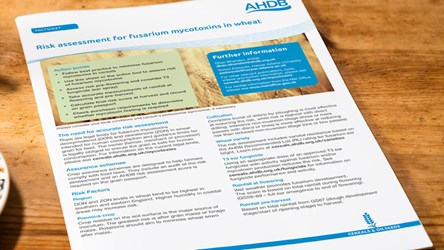 Some fungal species can grow on crops and foodstuffs and produce toxic chemicals. Of widely varying toxicity to humans and animals, these chemicals are called mycotoxins. To keep mycotoxin levels below set limits, it is important to follow best practice – which includes the completion of a risk assessment.

Which fungal species are associated with cereal mycotoxins?

In cereals, mycotoxins can result from fungi that either develop from field-borne infections (fusarium mycotoxins and ergot alkaloids) or in stored crops (ochratoxin A).

Which fungal species are associated with cereal mycotoxins?

The need for accurate risk assessment

There are legal limits for fusarium mycotoxins deoxynivalenol (DON) and zearalenone (ZON) in wheat intended for human consumption and guidance limits for feed grain.

The owner (farmer, merchant or processor) is legally obliged to ensure grain is safe for human consumption. Depending on end use, processors may require a lower limit at intake than the legal limit for unprocessed cereals to ensure finished products conform to legal limits.

Crop assurance schemes are designed to help farmers comply with food laws. They include an audit of the risk assessment and an AHDB risk assessment score is required on the grain passport.

What are the limits for mycotoxins?

DON and ZON levels in wheat tend to be highest in southern and eastern England. Higher humidity in coastal areas may increase risk.

Crop residue on the soil surface is the major source of inoculum. The greatest risk is after grain maize or forage maize. Rotations should aim to minimise wheat sown after maize.

Using an appropriate dose of an approved T3 ear fungicide with activity against fusarium and/or mycotoxin production reduces the risk.

Wet weather promotes fusarium development. The score is based on total rainfall during flowering (GS59–69 – full ear emergence to end of flowering).

Wet weather promotes fusarium development. The score is based on total rainfall from GS87 (dough development stage/start of ripening stage) to harvest.

Keep control of your grain quality

An introduction to grain sampling

How to manage mycotoxin risks

Order a printed copy of the mycotoxin risk assessment

Covering thousands of sites across England, Scotland and Wales, our map-based tool shows how much rain has fallen during the critical winter wheat flowering and pre-harvest periods. Use this information to help calculate (DON) risk assessment scores required on the combinable crops grain passport.

Use the mycotoxin rainfall risk tool for cereals

The following resources will help you assess and manage mycotoxin risk. They will also help you to obtain composite and representative samples for testing for DON and ZON (where required by the end-user).

UK Codes of Practice produced by the Food Standards Agency

Use the mycotoxin rainfall risk tool for cereals

Our map-based tool shows how much rain has fallen during the critical winter wheat flowering and pre-harvest periods.

Fusarium and microdochium in cereals

Find out more about fusarium species and microdochium species

A robust foundation to instil confidence

An article from Crop Production Magazine

Agrochemical residues, mycotoxins and other major contaminants in cereals and co-products have been monitored independently since mid-1980s. Find out about our research that aims to help ensure the safety of the UK grain and its end-products.