Fusarium and microdochium in cereals

M. nivale is the primary pathogen in the group that causes seedling blight. Seedling blight causes pre- and post-emergence damping off. This can result in seedling death and poor establishment. Surviving seedlings may develop a brown lesion around soil level. This can develop into foot and root rot. Symptomless infections can also occur.

Foot rot becomes obvious from late stem extension onwards. It results in dark-brown staining of the lower nodes. Long dark streaks may also appear at the stem base. On older plants, fusarium infection can produce a true foot rot, where the stem base becomes brown and rotten, resulting in lodging and whiteheads. This symptom is less common in the UK but can develop very dry seasons.

Fusarium species cause a range of symptoms on the ear. Bleached ears often show above the point of infection around the milky ripe stage (GS 75). Later infections may result in infection of the grain without obvious bleaching of the ears. The presence of orange/pink fusarium spores may also be visible on infected spikelets. As the crop ripens, symptoms become less visible. At harvest, fusarium ear blight can result in shrivelled grains with a chalky white or pink appearance, although this is not always the case. There is little correlation between fusarium-damaged grains and mycotoxin occurrence. Therefore, the presence of ear blight symptoms is not a good indicator of mycotoxin risk.

Primary infection by fusarium is from infected seed, soil, crop debris and volunteers or host weed species. Spores – from seedling blight or foot rot lesions – that are splashed up the plant or move from leaf to leaf are the main source of ear blight infection. For some fusarium species, spores are also wind-spread, although this is not an important infection source. Ear blight infection occurs during flowering. It infects the grain and completes the life cycle.

Most cereal crops develop fusarium symptoms each year. F. culmorum and F. graminearum are the most commonly found species in the UK that cause ear blights. Although infection by fusarium species can cause poor establishment and lower yields, the most important issue is the production of mycotoxins in the grain by some species (see mycotoxin section below). However, the presence of ear blight is not a good indicator of likely mycotoxin risk. Mycotoxins are present at lower levels in barley and oats compared to wheat. The overall risk of DON exceeding legal limits in wheat is low and in barley and oats is very low.

F. graminearum and M. nivale cause the most significant seedling losses in UK wheat. However, crops usually compensate from the loss of a few plants through tillering. F. graminearum is more common in a maize-producing area, whereas M. nivale is more generally distributed. Severe foot rotting in wheat is very rare in the UK because badly infected seed is not used and seed treatments are effective, and losses are generally very small.

High levels of ear blight can occur, especially when conditions are conducive (e.g. wet) during flowering, but yield losses are rarely serious. Seed saved from these crops can suffer from poor establishment, unless the seed is treated with a product effective on fusarium.

The mycotoxins DON and ZON are frequently detected in wheat but average concentrations are usually below the legal limits. Limits are most frequently exceeded in wet harvest years.

Seedling blight in barley due to fusarium species is rare, but may occur where there are very high infection levels and seed is sown into cold seedbeds. Losses are generally not as high as those seen for wheat.

Ear blight and mycotoxin risk is also lower in barley than in wheat, but should be considered if barley is commonly grown in rotation with maize with minimum tillage. Developed for wheat, the AHDB fusarium mycotoxin risk assessment tool is also useful for assessing risk in barley.

Oats are more resistant to fusarium infection than wheat and barley, and it is difficult to see the symptoms in this crop. Symptoms can include premature plant death or bleaching of spikelets.

F. langsethiae is the predominant species that infects oats and produces the mycotoxins HT-2 and T-2. There is good evidence that at least 90% of mycotoxins are removed during dehulling. Previous Food Standards Agency surveys of fusarium mycotoxins in retail oat products have identified that exposure to these toxins from oat products in the UK diet is very low.

Mycotoxins are toxic chemicals produced by specific fungi that can grow on a variety of different crops and foodstuffs. Different fungal species produce mycotoxins of widely varying toxicity to humans and animals. Fusarium species are not the only group of fungi to produce mycotoxins, they are also produced by ergot alkaloids and ochratoxin A (the latter during crop storage).

F. avenaceum, F. culmorum and F. graminearumare the main mycotoxin-producing species, and these all produce similar symptoms. F. poae and F. langsethiae do produce mycotoxins but are not such an important source. M. nivale and M. majus do not produce mycotoxins.

Mycotoxins formed before harvest are stable and likely to remain during storage but not increase.

Although legal limits exist for fusarium mycotoxins in UK cereals, the risk of exceeding them is low. Risk varies between regions and years depending on climate and the intensity of host crops in the region. Levels of mycotoxins are much lower in the UK than in mainland Europe and rarely exceed current EU limits.

There are legal limits for fusarium mycotoxins deoxynivalenol (DON) and zearalenone (ZON) in wheat, barley, and oats intended for human consumption and guidance limits for grain for feed. The owner (farmer, merchant or processor) is legally obliged to ensure the grain is safe for human consumption. This means that all sellers must be able to demonstrate due diligence in determining the levels of mycotoxins that are present.

Depending on end use, processors may require a lower limit at intake than the legal limit for unprocessed cereals to ensure finished products conform to legal limits.

T-2 and HT-2 mycotoxins are produced by fusarium species that are favoured by drier conditions, such as F. langsethiae. Therefore, risk factors are different to those for DON/ZON. Currently (2019), there are no legal limits for T-2 and HT-2. In 2013, the European Commission published a Recommendation that included indicative levels for the combined concentration of T-2 and HT-2. The Recommendation states that Member States, in conjunction with industry, should continue to monitor these mycotoxins and, where they exceed the indicative level, conduct investigations to determine why the exceedances occurred and what mitigation can be used to avoid exceedances occurring in the future.

Table 2. EU indicative levels (I) for the combined concentration of HT-2 and t-2 (ppb) in unprocessed cereals

Between sowing and flowering

Note: When ear blight levels are high nationally, the risk of DON and ZON occurrence in crops will increase. Although mycotoxin risk in barley is lower than in wheat, it should be considered, especially when it is commonly grown in the rotation with maize with minimum tillage

The risk of fusarium diseases can be minimised throughout the season: from rotation planning, to deciding which field to harvest first.

Use our risk assessment tool to determine the mycotoxin risk in wheat and inform the risk in barley. Use the results to guide management and determine the likely crop level of mycotoxins. For traceability purposes, it is always best to document the actions required when performing a risk assessment.

Before deciding on a management strategy, consider the end market for your crop. Low mycotoxins levels are more important for grain intended for human consumption, than grain for feed.

Maize and wheat are the most susceptible host crops. Remove straw from these crops and minimise wheat sown after maize – these are the most significant ways to reduce the risk of fusarium mycotoxins (i.e. a higher impact than fungicide application at flowering).

Seed standards contain no certification for fusarium levels. Conduct specific tests, if information on seed infection is required. The agar plate method takes 7–10 days and gives results as % infection. If the sum of seedling blight infection exceeds 10%, then use a seed treatment (relevant for both wheat and barley).

Varieties with a higher AHDB Recommended List disease rating have a lower risk of fusarium head blight and mycotoxin contamination. However, UK wheat varieties have a limited range of resistance to head blight.

Apply sprays during early- to mid-flowering (GS 63–65). Once flowering is complete, sprays will not be effective at controlling ear blight. Although sprays applied around GS59 maintain canopy size and protect green area, these will not control ear blight.

Where fusarium mycotoxins are not a concern, for example in feed wheat, a spray targeted at fusarium is not usually required, especially in varieties with good disease resistance.

Crop management should also aim to minimise the risk of lodging by careful management of nutrition and PGR applications.

Avoid delays at harvest for crops at high risk of mycotoxins, especially where grain is intended for human consumption. Set combine, especially the fan speed, to minimise retention of light fusarium-damaged grains and chaff that contain the highest concentrations of mycotoxins. Dry and cool grain as soon as possible.

Harvest and store grain from localised patches of weathered or lodged crops separately.

Test suspect samples for fusarium mycotoxins. Effective sampling is essential, as the distribution is not likely to be uniform within a stored bulk. The sampling protocols in the AHDB Grain sampling guide meet the requirements mycotoxins.

Tests range from simple on-farm tests, which indicate the presence or absence of a specific mycotoxin, to officially recognised and validated methods that quantify levels. All methods require prior extraction from a ground grain sample.

Qualitative lateral flow dipstick methods indicate the presence or absence of a specific mycotoxin above a set threshold. Presence, or absence, of a test band is interpreted by reference to the manufacturer’s instructions.

The following resources will help you assess and manage mycotoxin risk. They will also help you to obtain composite and representative samples for testing for DON and ZON (where required by the end-user). 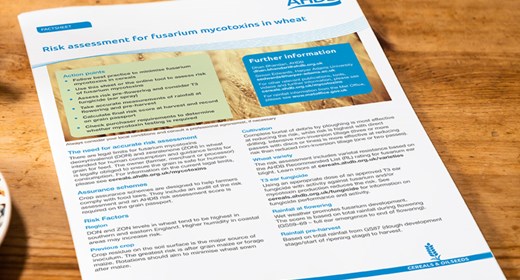 This definitive guide to cereal diseases in the UK contains full colour photgraphs for identification plus information on hosts, symptoms and life cycles.

Read about the various control measures to reduce the risk from ergot in cereal crops. There is currently no EU legislation for maximum levels of ergot alkaloids but discussions in EFSA may result in future legislative limits. 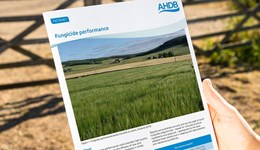 Our fungicide performance work provides high-quality, independent information on the efficacy of fungicides against key diseases in wheat, barley and oilseed rape.

Fungicide programmes for wheat and barley

Agrochemical residues, mycotoxins and other major contaminants in cereals and co-products have been monitored independently since mid-1980s. Find out about our research that aims to help ensure the safety of the UK grain and its end-products.

AHDB information should be read in conjunction with the UK Codes of Practice produced by the Food Standards Agency.