How to manage weeds in arable rotations – a guide

How to improve weed management in a rotation dominated by autumn-sown crops. 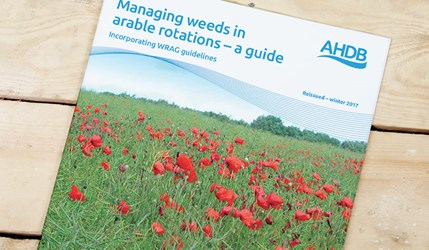 Weed control is vital for high yields of good-quality arable crops and to help manage the spread of pests and diseases. Yet, with limited active ingredients, a need to protect water and manage herbicide resistance, the weed challenge must be managed across the rotation.

Why is weed control so challenging?

Weed control has always been challenging but has become even more difficult because:

Improved weed management requires us to:

Soil contains many weed seeds – this is called the ‘seedbank’. For optimum management, it is important to know the weed species present, as well as their abundance, status (e.g. herbicide resistance and dormancy) and distribution in the soil profile.

The role of the arable weed seedbank

Biology and identification of arable weeds

To make the most out of control options (non-chemical and chemical), it is essential to understand target weed populations. This will help you identify any chinks in their armour. The encyclopaedia of arable weeds is the definitive guide to arable weeds. For each weed, the guidance includes information on its life cycle, distribution and management. If known, the herbicide resistance status is provided.

The encyclopaedia of arable weeds

The interaction between weed and crop growth is important, with most problems occurring when emergence coincides. Knowing when weeds are most likely to germinate will help you pinpoint control.

The interval between harvesting one crop and drilling the next is important, as a non-selective herbicide can be used on emerged weeds. Learn about drilling tactics to help you establish integrated weed management strategies.

The composition and sequence of arable crops in the rotation influences the weeds present and the opportunities for control. Discover which species are the most competitive to help you plan integrated weed management strategies.

Cultivations stir the weed seedbank, burying freshly shed seed and bringing seed from lower down the profile to the surface. The extent of this mixing is heavily influenced by the cultivation approach.

Herbicides form a large part, typically 20–30%, of the variable costs associated with producing a crop. With the need to consider herbicide-resistance risks too, it is important to target each spray required.

Find out how to optimise herbicide application techniques to make every drop count in the fight against arable weeds. This page covers spray equipment (e.g. nozzles) and rates.

Spray application and herbicide efficacy in cereals and oilseed rape

Although product labels and technical support provide guidance on how to optimise herbicide effectiveness in specific situations, these general principles apply to all crops.

Spray timing and herbicide efficacy in cereals and oilseed rape

Keep herbicides out of watercourses

It is important to keep pesticides out of watercourses. Water quality legislation may affect or restrict use of several herbicides, particularly those used extensively, as well as those used at high rates and applied at times of year when drains may be running or there is potential for run-off to watercourses. The result of new legislation could be restrictions on rate and/or timing, with product withdrawal as a last resort. The Voluntary Initiative provides best-practice guidance for the main pesticides that pose a particular concern to water.

The encyclopaedia of arable weeds

The definitive guide to arable weeds in the UK.

Essential information on all plant protection products (with on-label authorisations)