Agriculture is a significant contributor to UK ammonia emissions, however, there are steps that you can take to reduce emissions on your dairy farm. Look at these top five ways to find out more.

1. Efficient use of protein in the diet

A key element of ammonia is the surplus nitrogen excreted by animals as urinary urea. The main source of nitrogen obtained by the animal is dietary protein. So, if protein feeding is properly balanced to match requirements, less nitrogen will be excreted, and less ammonia will be produced from the slurry.

Research commissioned by AHDB demonstrates that in nutritionally balanced maize silage-based diets, crude protein levels in milking cow diets can be successfully reduced to 15% with no detrimental effect on milk output or fertility. Further studies are being conducted in home-grown forage-based diets.

Keeping floors in livestock areas clean will reduce ammonia emissions. Concrete yards and passages contaminated with slurry provide an emitting surface. The amount of ammonia emitted will depend on the quantity of slurry, ambient temperature, airflow and the length of time the slurry is exposed to the air. Collecting yards, livestock handling areas and parlours should, therefore, be scraped and washed down as soon after use as possible. Pooling of slurry should be avoided.

Cubicle passages, feed passages and loafing areas should be designed to drain quickly and be scraped as frequently as possible. Automatic scrapers should be set to scrape every one to two hours, as seen in the image below. Robotic scrapers can be used while cows are in the cubicle building. 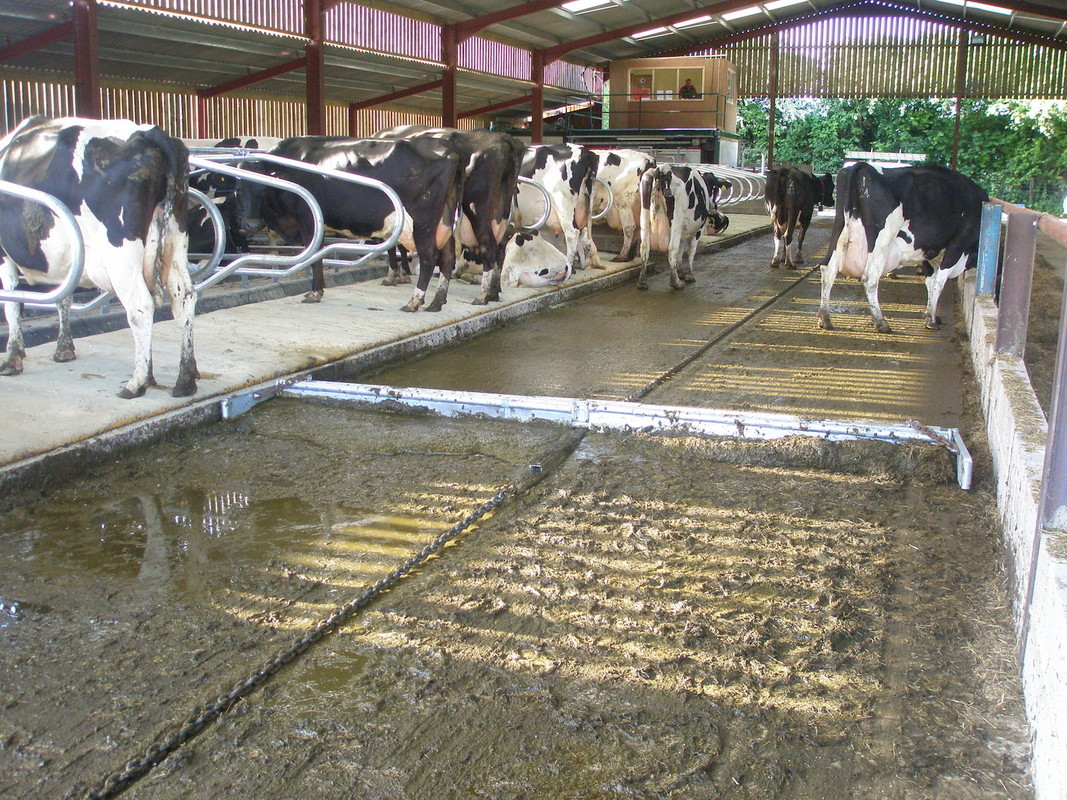 The rate of emitting is dependent on temperature and airflow, but peak emission rates are usually seen within two hours of deposition. So frequent cleaning will reduce ammonia emissions.

Open lagoons and slurry stores allow ammonia to escape into the atmosphere. Putting a cover over the store will create a concentration of ammonia beneath the cover, suppressing further ammonia production.

Above ground tanks and below ground lagoons can both be covered with flexible sheeting systems that may be eligible for grant funding and can reduce ammonia emissions by 80%.

Ammonia emissions are increased when slurry comes into contact with the air, especially in warm, windy conditions. Using shallow injection, trailing shoe or dribble bar equipment to spread slurry will reduce this contact and so reduce emissions. Up to 80% of the nitrogen contained in slurry can be lost to the environment when splash plate equipment is used. Shallow injection can reduce ammonia emissions at spreading by up to 70%.

Choose cooler, less windy weather conditions to spread slurry. Where possible, incorporate surface-spread slurry and FYM into the soil as soon as possible and certainly within 12 hours.

More of the nitrogen content of slurry is retained and therefore available to the crop.

Defra has issued a Code of Good Agricultural Practice to give guidance on actions farmers can take to reduce ammonia emissions.

More fertiliser nitrogen is available to the crop.