Most areas of the UK have already breached the ‘high’ excess winter rainfall (EWR) threshold, according to mid-season estimates published by AHDB.

The extent of the ‘moderate’ and ‘high’ EWR is further south and east this year, when compared to the long-term average (1981–2010).

As EWR has a large influence on the nitrate leaching and, thus, the nitrogen availability to a crop, farmers are being reminded to refine their nitrogen management plans in accordance with the AHDB Nutrient management guide (RB209).

EWR is the amount of rainfall the land receives after the soil profile becomes fully wetted in the autumn (field capacity) and before the end of drainage in the spring (around the end of March).

AHDB uses Met Office data to map EWR over 199 40km by 40 km squares that cover the whole of the UK, with the following categories used:

James Holmes, who oversees work on RB209 at AHDB, said: “People who farm towards the West and North of the UK are used to dealing with relatively high levels of winter rainfall. However, the picture towards the East and the South tends to be more changeable. It’s in these regions where greater flex needs to be applied to nutrient management plans.

“Estimates of soil nitrogen supply can be greatly improved by using RB209’s EWR look-up tables. Some people may need to consider adding extra nitrogen to compensate for that leached during the winter months. However, it is important that any adjustment is made after crop condition and, critically, yield potential have been considered.” 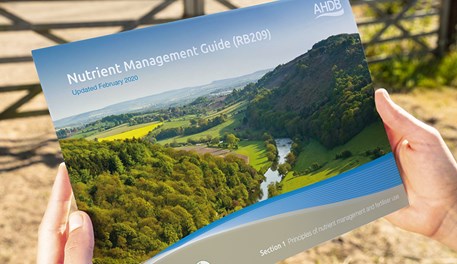 EWR information was funded by Defra and produced by ADAS as ‘spring N advice’ up until 2015. In that year, AHDB took on responsibility for the publication of nutrient management guidance, through RB209, from Defra. The release of EWR data is part of AHDB’s commitment to promoting best nutrient management practice.