Domestic wheat prices have seen increases over the course of May, tracking wider increases in global wheat markets. A weaker sterling has supported domestic prices to track closer to European equivalents. Domestically, a continued lack of significant rainfall in the UK has raised concerns for the quality of the planted crop. Owing to these factors, UK new-crop wheat prices saw rises but were capped by the import price ceiling.

The European organisation, Stratégie Grains, lowered its end of season estimate of old-crop EU-28 (including the UK) wheat stocks by 1.1Mt to 12.6Mt. This was because of an expected rise in exports due to stronger demand. In addition, the scarcity of wheat for export in Black Sea regions has benefitted European wheat exports. The organisation also lowered its estimate for 2020 soft wheat production by 2.1Mt, owing to the adverse weather conditions this season. Lower wheat availability can be expected across the continent next season, likely translating to an uptick in maize usage in ruminant feed blends

The EU supply situation for barley is better; production is forecast to increase by 0.3Mt next season. In addition, the closure of the food service industry across Europe that has affected alcohol consumption and will likely add to barley stocks with malting demand reduced.

The South American 2019/20 maize production estimates were raised earlier this month as recent rainfall eased dryness concerns. For feed markets, this adds to the large weight of maize supplies available this calendar year. The dryness concerns were previously a factor for maize prices to increase. Conab added 0.5Mt to the Brazilian estimate to a total of 102.3Mt, an increase on the record level of 101.0Mt last year. The Argentinian maize crop was estimated up 1.2Mt by the Rosario grain exchange, to 51.0Mt.

The condition of domestic barley has declined from the previous report released in March. For winter barley, now 25% of the crop is rated as ‘good’ or ‘excellent’, whilst 27% is in ‘poor’ or ‘very poor’ condition. For the spring barley crop, which saw large increases in area planted this season, 48% was rated as ‘good’ or ‘excellent’. An estimated 13% was rated as ‘poor’ or ‘very poor’, up 10% from last year.

Global oilseed prices have recovered slightly from March and April lows. As more countries begin to ease lockdown measures and roads get busier, demand for biofuels are likely to pick up. As some vegetable oil supply moves to the creation of biodiesel, this will have a knock on effect for oilseed demand.

The US – China trade relationship is an important factor for oilseed markets. Following the ‘Phase one’ deal in January, China is obliged to purchase an additional $32bn of US agricultural products over the course of 2020 and 2021. However, Brazilian origin soyabeans have made up the bulk of Chinese purchases since, mainly due to price difference. Chinese imports of US soyabeans for April were down 62% year-on-year. With the US forecast to produce 112.26Mt of soyabeans next season, significant purchases from China are needed to prevent the large supply from pressuring markets further.

The ADAS crop condition report highlights a dire picture for the 20/21 UK OSR crop. An estimated 41% of the winter OSR crop is rated in the ‘poor’ or ‘very poor’ categories. For spring OSR, this figure is estimated at 40%. The worst affected areas have been the south and east of England, parts of the Midlands and Yorkshire. As a result, it is likely that the UK’s rapeseed import requirement next season will be larger than this season.

The EU likely too will have the same issue. Ukraine accounted for 52.8% of EU rapeseed imports in the season to 24 May totalling 2.86Mt. Dry conditions across Black sea regions in recent months have lowered Ukrainian rapeseed production estimates, with recent forecasts suggesting a crop 11.6% down, year-on-year. If realised or worse, EU rapeseed prices will likely see support from this as the import ceiling moves higher.

Sterling has weakened against major currencies throughout May, but showed some signs of recovery recently. An increasing sentiment favouring negative interest rates from the Bank of England has worried sterling markets. The recommencing of Brexit negotiations will also affect sterling over the mid-term.

UK pig meat exports during August were down both on the previous month and also compared to the same month last year.

A document recently released by the Chinese Government highlights their ambitions for food security in livestock sectors. 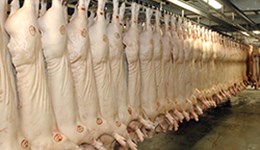