What is excess winter rainfall (EWR)?

Excess winter rainfall (EWR) is the amount of rainfall the land receives after the soil profile becomes fully wetted in the autumn (field capacity) and before the end of drainage in the spring (around the end of March). Ideally, the calculations should also take account of evapotranspiration during this period.

EWR has an important influence on the amount of nitrate leached and, thus, the nitrogen availability to a crop. It must be taken into account when planning nitrogen applications.

AHDB uses Met Office UK data* to present EWR data over 199 40km by 40 km squares. Four maps are produced, one for bare soil, one for winter cereals, one for winter barley and one for winter oilseed rape. Note: the latter crop has a larger canopy and loses more water. EWR deviation from the long-term average (1981 to 2010) is also provided. The map is updated during the winter months. The current map displays EWR over the period 1 October 2019 to 31 January 2020.

Nitrate, unlike ammonium, is not held on to soil particles. This makes it soluble and vulnerable to leaching. As ammonium-N sources are rapidly converted to nitrate, however, they are equally vulnerable.

The amount of nitrate leached depends on the quantity in the soil when the soil reaches field capacity, the soil type and the amount of water draining through the soil – excess winter rainfall (EWR).

Light sand soils and some shallow soils can be described as ‘leaky’. Nitrate in these soils can be fully leached in an average winter, even where substantial residues are present in the autumn. The Soil Nitrogen Supply (SNS) Index is nearly always 0 or 1 and is independent of previous cropping, except in low rainfall areas or after dry winters.

Deep clay and silt soils can be described as ‘retentive’. The leaching process is much slower and more of the nitrate residues in autumn will be available for crop uptake in the following spring. Differences in EWR will have a large effect on SNS in these soils. Low levels of SNS (Index 0 and 1) are less frequent than on sandy soils. Other mineral soil types are intermediate between these two extremes.

Because of both regional and seasonal differences, separate SNS Index tables are given in the AHDB Nutrient Management Guide (RB209) sections 3–6 for low, medium or high rainfall situations.

The SNS index of a field can be estimated by the Field Assessment Method described in RB209. In addition to information on soil type and the previous crop, this method requires an estimate of the rainfall range for the field, ideally based on EWR. RB209 provides SNS indices in simple look-up tables (Section 4, Pages 10-11) for the following rainfall categories:

The EWR information can be used to guide nutrient management planning. AHDB stresses, however, that field-level information should be used to provide the best estimates of SNS indices.

Guidance on the use of nitrogen fertilisers in nitrate vulnerable zones 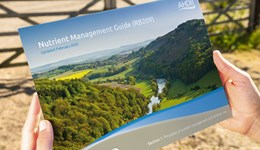 RB209 Section 1 Principles of nutrient management and fertiliser use

The AHDB Nutrient Management Guide (RB209) offers best practice guidance on the application of fertilisers and organic materials to crops and grassland. 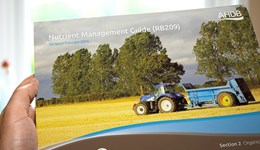 In this section you will find information on the nutrient content of organic materials such as manures, compost and digestate. 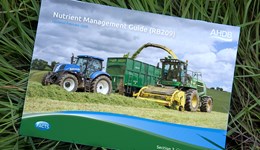 In this section you will find information on how to determine the nutrient requirements of grass and forage crops. 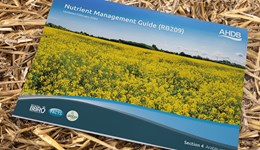 In this section you will find information on how to determine the nutrient requirements of cereals, oilseeds, peas and beans, sugar beet and biomass crops. 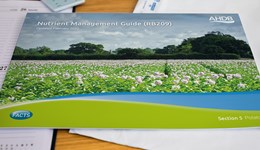 In this section you will find information on how to determine the nutrient requirements of potatoes. 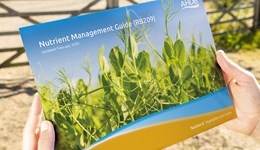 In this section you will find information on how to determine the nutrient requirements of vegetables and bulbs. 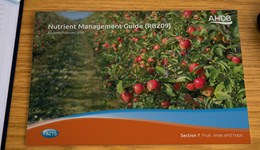 In this section you will find information on how to determine the nutrient requirements of fruit, vines and hops

Find out what's changed in RB209