The ‘Ramularia leaf spot in barley’ factsheet includes information on the life cycle of ramularia and control options. It also includes numerous images to allow ramularia symptoms to be identified and severity scored. 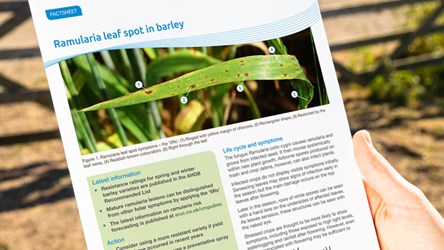 The disease affects winter and spring barley. The fungus is able to infect wheat and oats but the incidence and importance of this is unknown.

Ramularia shows no visible symptoms at the seedling stage, so identification within seed and seedlings requires molecular diagnostics. Symptoms first appear or on the upper leaves after flowering, but symptoms can be seen earlier if the crop is stressed or on senescing leaves.

Typical symptoms of ramularia comprise small brown rectangular lesions, often surrounded by a yellow halo. They resemble the spot-form of net blotch. Following high levels of infection, the leaves may senesce rapidly. Lesions are often obvious on dead leaves as black spots. The spores of the fungus are visible on the surface of dead leaves. Ramularia is frequently found in association with other leaf spots such as abiotic sun scorch, physiological leaf spot and spotting caused by damage to the leaf wax following the application of some fungicides. For information on how to identify mature ramularia lesions, see the 'Use the '5Rs' to identify ramularia symptoms' panel.

Ramularia can be detected on the seed and within symptomless leaves. The disease can also be dispersed via air-borne spores. Symptoms can develop on dead lower leaves but symptoms are rarely seen on healthy green leaves until after flowering. There may be a stress or physiological trigger for symptoms to develop. The toxin rubellin D is also thought to be produced by the fungus when the barley host is stressed. Under certain light conditions, this toxin causes oxidative stress, leading to plant cell damage and causing typical leaf symptoms.

Ramularia leaf spot can cause extensive damage to the upper leaves in spring and winter barley once crops have finished flowering. This causes losses in yield and grain quality. Trials suggest yield loss can be up to 0.5 t/ha in heavily infested crops.

Ramularia leaf spot symptoms are reported with increasing frequency across the UK. However, ramularia is probably still underreported, due to unfamiliarity with the symptoms. Though previously associated with spring crops, evidence of ramularia in winter crops has increased in recent years.

Although seed-borne, ramularia is not controlled effectively by seed treatments. Avoid farm-saved seed from crops with high levels of ramularia symptoms. Ramularia became resistant to strobilurins some years ago. Recently, there has been some evidence of resistance to azoles and SDHIs. Multisite fungicides, such as chlorothalonil, are particularly important in fungicide programmes.

The most effective timing for fungicide applications against ramularia is at booting (GS45 to GS49). Later applications, up to ear fully emerged (GS59), may also be effective but may be restricted for malting barley crops. Once symptoms develop on the upper leaves post-flowering, treatment is not effective.

A complex set of environmental and genetic factors drives the development of visible ramularia symptoms in barley. Due to the level of complexity, it is not possible, at present, to generate robust varietal disease ratings for inclusion within the AHDB Recommended Lists (RL).

> In high-risk situations, use a preventative spray at booting (GS45 to GS49)

> Use identification guidelines and look for symptoms late in the season

*A decision not to renew the approval of chlorothalonil was made at a meeting of the European Standing Committee on Plants, Animals, Food and Feed on 22 March 2019. All products that contain this active ingredient expire by 20 May 2020.

Use the '5Rs' to identify ramularia symptoms

An article from Crop Production Magazine

Visit our main page for disease management in this crop

SRUC’s Neil Havis explains how to tell ramularia leaf spot lesions apart from other foliar symptoms and how to score symptom severity.

Upper leaves with some necrosis. Some lesions on middle leaves.

Many lesions and severe necrosis on upper leaves. Numerous lesions on middle leaves.

Extensive lesions on upper leaves. Many lesions on middle leaves and necrosis.

Almost all leaves necrotic with lesions on all leaves.

Other foliar symptoms (not caused by ramularia)

In October 2018, AHDB held an international ramularia workshop that brought together researchers, plant breeders, agrochemical companies, agronomists and other experts to share their experiences and theories on this challenging disease. For a flavour of discussions and the ways forward identified, see our blog.