Dairy producers will be familiar with which type of animals are the most fertile in their herds. They’ll have noticed that some traits often seem to go hand-in-hand with good fertility such as calving ease or even other health traits such as lameness and mastitis. And when they find they have cows in the herd which enjoy good fertility and the accompanying traits, they’ll want to use them to breed replacements and continue the virtuous cycle associated with fertility.

But confirming which genetic traits are linked with fertility in UK herds – in either a positive or negative direction – requires geneticists to study the data from millions of records of UK cows. By doing so, they can see which traits have the strongest and most positive correlations and which traits are pulling in the opposite direction.

We have examined the data from cattle in the current Holstein population and determining which traits are most strongly associated with Fertility Index, the genetic index for female fertility.

Discounting the obvious traits at the top of the list – of calving interval and non-return rate index, both of which are important components of Fertility Index itself – the next strongest link is with the three selection indexes, Spring Calving Index (£SCI), Autumn Calving Index (£ACI) and Profitable Lifetime Index (£PLI)

Find out which breeding index is right for you

Table 1: Correlations between a cross-section of genetic indexes and Fertility Index

A negative correlation means that as the listed index increases, female Fertility Index tends to come down.

A positive correlation means that as the listed index goes up, female Fertility Index also tends to improve.

Please note, the association between SCC/mastitis and fertility is shown as negative, meaning there’s a genetic link between poorer udder health and lower fertility.

This is no surprise, according to geneticist, Marco Winters from AHDB Dairy. “Fertility Index is a significant component of these selections indexes, most strongly featuring in £SCI, where tight block calving is critical to commercial success. It features slightly less strongly in £ACI, the index for herds block-calving in autumn, and a touch less in £PLI, where fertility still remains a key component,” he says.

After these selection indexes, the individual traits come into play. At the top of this list is Lifespan Index with a correlation with Fertility Index of 50% (see panel). This confirms the importance of fertility itself in determining the length of time a cow spends in the herd.

“Again, this is to be expected as fertility is still the single greatest reason for a cow leaving the herd, representing an estimated 20-30% of culls,” says Mr Winters.

“This indicates cows which are more angular are also less fertile, which again comes as no surprise,” says Mr Winters. “The expectation is that angular cows have lower body condition, itself associated with a greater risk of metabolic disease, especially those associated with negative energy balance, such as ketosis.”

Body depth also features high on the list, although its negative correlation of -38% may be more unexpected.

“The negative correlation means that shallower bodies are associated with better fertility,” says Mr Winters. “We don’t know the reason for this but speculate that it could be due to fewer displaced abomasums in cows with less depth of body. However, it could also be linked to the fact that deep bodied cows often tend to be taller and more angular – both traits which are pulling against good fertility.

“It’s worth noting that for many of the conformation traits, the optimum for overall profitability tends to be an intermediate rather than at either end of the extremes,” he adds.

Maternal calving ease at 29% is far more obviously associated with fertility. This reflects the fact that the uterus takes longer to recover and the cow longer to return to cyclicity if she’s had a difficult calving.

The next correlation of -26% between Type Merit and Fertility Index comes with a word of caution.

“This indication that selection for Type Merit alone tends to be to the detriment of fertility should remind producers to use this index with due care,” he says. “It is linked with the tendency for the highest Type Merit sires to be taller in stature with more angularity, both being traits associated with a reduction in female fertility.

“For any producer strongly selecting for Type Merit, it’s worth checking Fertility Indexes too and seeking out those bulls with the highest figures.”

Lameness Advantage features next on the list, and it’s no surprise to find the correlation with female fertility is positive at 25%.

“This may seem a strong link for an apparently unrelated aspect of health but fertility is easily compromised when the cow is fighting disease and it’s well known that a key effect of lameness is to diminish reproductive performance,” says Mr Winters. “Apart from its known effect on cyclicity, even cows which are cycling are much less likely to display signs of oestrus if they are lame.”

Beneath the 25% mark, there are numerous traits associated with fertility, albeit with fairly low correlations. Of note amongst these is a 24% correlation with body condition score index, which may at first seem less than expected.

It’s no surprise that milk production itself is negatively correlated with fertility (-24%), and indeed, breeding for production is considered to be the main reason for the historic decline in fertility.

“Fertility Index was only introduced in 2005 and before we had this genetic index, we had no reliable way of knowing whether a bull chosen for breeding would transmit good or bad fertility,” he says. “This also highlights another important point, in that the availability of the various genetic traits for selection now allows us to overcome these associations and find bulls which can provide the best of both worlds – improving production alongside fertility.”

However, more encouraging is the positive correlation between fertility and percentage protein (19%) and fat (12%), suggesting breeding for fertility and milk quality go hand in hand.

Other traits include the link with mastitis (-23%) and somatic cell count (-22%) indicating that both of these issues tend to improve (become more minus in score) as fertility also increases.

“This, again, is expected as if an animal doesn’t have to waste precious energy fighting infection, it has more energy available to put into fertility,” he says.

The importance of fertility and other genetic traits are all taken into account in the formulae for the UK’s national breeding indexes, £PLI, £SCI and £ACI.

“This means that sires which score highly for these three selection indexes are more likely to transmit good fertility as well as associated traits, so any one of these indexes is a good starting point for a herd’s breeding strategy,” he says.

“However, if you also select your sires and replacement heifers with an eye on their Fertility Index, you will do far more than improve your herd’s fertility,” he adds.

Conversely, he warns that selecting traits which are negatively linked to fertility, could inadvertently be pulling your herd’s innate fertility in the wrong direction.

“All genetic selection has to be undertaken with care as it can easily lead a herd down the wrong path,” he says.

“However, all producers should be looking to improve their herds’ genetics of fertility as this will stack the odds of achieving good reproductive performance firmly in your favour,” he says. “The difference in calving interval between daughters of a good Fertility Index bull (say +15) and a bull whose FI is zero is around nine-days. Like all genetic change, this improvement is permanent and cumulative over the generations.

“So, I would urge producers to use service sires with a high positive Fertility Index as part of a balanced breeding strategy,” he says. “This will ensure you make the job of getting cows in calf less challenging in years to come and could also have the benefit of some worthwhile knock-on effects.” 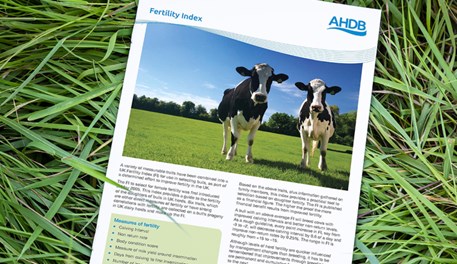 A practical tool to selection based on daughter fertility.