Brits love the taste of bacon and sausages. However, negative health perceptions of these classic foods are impacting sales, particularly among older consumers.

The sound of bacon sizzling was recently rated one of the UK’s favourite sounds, while the Full English breakfast and bacon sandwiches are among the nation’s most-loved meals. Bacon and sausages are important to the pork market – their combined worth in the year to 03 November 2019 was £1.8bn, 2.5 times the value of the primary pork market (Kantar). However, retail sales of bacon have declined in the last year, with volumes down by 5.6%. And more recently, sausages have gone into decline, driven by annualising on last year’s particularly good barbeque weather which boosted sausage sales.

When consumers are choosing what to eat, their primary driver of choice is enjoyment – an area where both bacon and sausages score highly. They also excel in practicality, the second most important motivation for choosing meals. Consumers choose both because they are quick to prepare and considered a filling meal. (Kantar, year ending May 2019).

However, health is growing in importance as a driver of meal choice – influencing one in three servings of foods. Processed pork doesn’t score highly in this area as few servings of sausages or bacon are chosen for health reasons.

Sausage sales had been in growth but in the last few months have gone into year-on-year decline, against a very strong performance in last year’s heatwave. They have seen significant premiumisation over the last few years, focusing on high pork content and premium flavours. The premium tier now makes up 36% of sausage sales by volume and 41% by value. It is here where growth has been strongest while standard and economy tiers have struggled.

Health perceptions around sausages, however, are struggling. 64% of consumers think that sausages are fattier than other types of meat and there has been an increase in the number of consumers who link them with heart disease, high blood pressure and cancer. However, it is older consumers who are most concerned about health and sausages are typically enjoyed by a younger consumer –families with children being less likely to cut back (AHDB/YouGov, August 2019).  Sausages also score highly on pester power; 13% of occasions where sausages are consumed in the home are driven by a partner or child requesting them (Kantar). This may contribute to protecting sausage performance against negative health perceptions.

Most losses have come from standard tier bacon which comprises 88% of bacon volumes. Value tier bacon has also seen steep losses since the beginning of 2019. Premium bacon, however, has grown steadily, up 6.1% in the year to November 2019, though still only accounting for 6.4% of the bacon market by volume. Premium tiers benefit from a ‘less, but better’ mentality among shoppers, especially those cutting back on processed meat for health reasons (Processed Poultry and Red Meat Main Meal Components, Mintel November 2018).

While older consumers are the most concerned about health when choosing food, older households purchase the most bacon. Losses of sales to this group have been particularly stark, with retired households buying 9.4% less bacon year on year (4,800 tonnes). Most of the loss has come from standard tier bacon – in fact the only tier in growth amongst retired households is premium.

Media reports linking bacon to cancer appear to have resonated with consumers; when asked, 18% claimed to have heard something about bacon in the media recently with over half of those people reporting the news had been negative. Many cited hearing negative reports about nitrates in bacon and recommendations that they cut back on processed meat. We have consequently seen a significant uptick in concerns about the healthiness of bacon, with sausages not far behind.

While many meals in the home are driven by health or practicality, eating out is viewed as a treat – therefore, sausages and bacon perform well in the out-of-home market. These products benefit from featuring heavily at breakfast time which is a growing daypart in out-of-home dining (MCA).

In the year to June 2019, the Full English Breakfast was the top dish for pig meat volumes, but occasions have fallen by 4% year on year. Compensating for this, sausage rolls and sausage sandwiches saw occasion growth, tapping in to the food-to-go trend and together accounting for approximately 27,000 tonnes of sausage. Servings of bacon sandwiches (accounting for around 12,000 tonnes of bacon) were flat year-on-year. 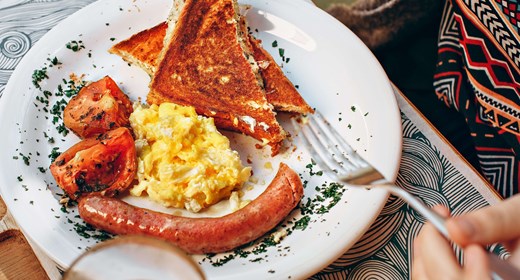 Sausage and bacon boosted by out of home breakfasts 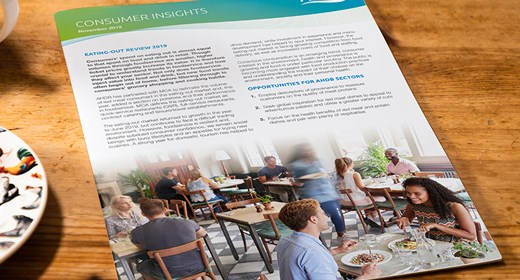