As the consequences of coronavirus continue to unveil and farmers are being asked to reduce production, Dr Jenny Gibbons, Senior Dairy Scientist at AHDB, reviews the available evidence to identify the options for farmers considering changing their milking frequency for all, or part, of their herd.

There are various approaches for reducing your milk yields that should be considered before changing milking frequency – our top tips for reducing milk production will help.

Before implementing any strategies aimed at reducing production, the full implications of such a decision must be understood and budgeted. In particular, it is important to consider whether you reduce the milking frequency of all or part of your herd. Strategies adopted in the short term can have significant long-term implications in terms of animal health, fertility, production and the business’s performance. Farmers considering this move should discuss changes to feeding strategies without compromising health and fertility with their vets and nutritionists.

What changes do I need to make to my parlour when reducing milk production?

There is limited research available on moving from milking three times a day to twice. Studies show that adding a third milking can raise milk yields by 10–15%, but taking cows back to twice-a-day milking may drop yields by only 8–10%.

For those considering dropping back to twice-a-day milking, speak to your vet and nutritionist to formulate a plan before making any changes to the ration. A practical point to discuss with your advisory team is how to protect your early-lactation cows and avoid them milking off their backs. It is also worth keeping in mind that reducing the most expensive part of the ration – concentrates – won’t necessarily have a big negative effect on yield but can be cost-saving in the long term. Transition cows are particularly sensitive to changes in feeding and management and increased health issues, e.g. displaced abomasums, can quickly eat into any short-term cost savings.

Some points to discuss with your staff are whether milking-machine settings need adjusting as cows may have a more rapid let-down depending on their stage of lactation. The length of milking may be longer for the milking after the longer milking interval, and it is important to ensure the cows have milked out properly. Give extra attention to checking cows for mastitis – cases may be more severe due to the longer time interval between detection and treatment. Depending on milking times, a shift system may be required or the opportunity to use staff elsewhere on the farm or to furlough staff. Dropping to twice-a-day milking could provide an opportunity for cost savings in staff wages and parlour running costs.

Twice-a-day milking to once

Reducing to once-a-day (OAD) milking is likely to only suit those suppling high milk solids onto the market. The majority of the research in this area comes from New Zealand and Ireland.

In New Zealand, it is relatively common to use OAD milking during the breeding season or during periods of pasture deficit, and it may help to improve submission and conception rates, particularly for heifers and thinner cows in large herds. It is important to consider the impact of OAD on milk production for the whole lactation. Some studies have demonstrated that OAD milking decreases immediate milk production by approximately 20% in early lactation, with the yield loss increasing to 30–50% as the duration of reduced milk frequency increases up to 10 weeks. Additionally, some research demonstrates carry-over effects when milking reverts to twice a day if OAD milking is longer than three weeks in early lactation. The evidence suggests that production losses due to OAD are dependent on the stage of lactation and are greater in early lactation than in mid- or late-lactation.

Moorepark found that daily milk solids were 20% lower when cows were milked OAD for the first four weeks. Where cows continued on OAD milking for another two weeks, cumulative milk solid yield was 19% lower than the twice-a-day cow (87 kg MS). Continuing milking OAD for a further two weeks, up to week eight of lactation, reduced daily MS yield by 23% compared with twice-a-day cows. Although MS yield was reduced during the OAD milking period, by the end of lactation, milk solids were similar for all treatments.

Less labour was required for OAD, in terms of both moving cattle and actual time spent milking, saving 4 minutes per cow compared with twice-a-day. The cows in this study had excellent fertility and no differences in fertility were picked up between the groups. There was also no difference in somatic cell count or body condition.

OAD generally suits cows with a lower genetic potential for milk yield as these cows experience a lower decrease in milk production. For somatic cell count levels, these mostly rise with OAD, partly due to the dilution of cell counts with twice-a-day milking. There are no studies reporting increased prevalence of mastitis where overall SCC is low, but farmers with high SCC need to be cautious. Crossbred cows and Jerseys adapt well to the system, but greater vigilance in checking for mastitis and an increased focus on preventing mastitis would be recommended for other breeds and for higher cell count herds.

With cows on OAD consistently producing less milk than their twice-a-day counterparts, it is tempting to speculate that they also have a lower DMI requirement and, therefore, lower feed costs. Unfortunately, there is very little information available on DMI in cows milking once daily. In any case, reduction in feed intake may not be as great as one might expect. Reports from a pasture-based trial in NZ suggested cows milked OAD ate about 3% less than cows milked twice-a-day. If the plane of nutrition of cows milked OAD is lower, significant additional decreases in yield would be expected and, in general, it would be recommended to maintain plane of nutrition targets until at least post-peak.

OAD milking partially alleviates the negative energy balance that occurs immediately after calving or during periods of energy deficits and can improve body condition score (BCS) – but this assumes an equal plane of nutrition. In addition, other studies show that OAD can improve the reproductive performance of dairy cows, with a reduced post-partum anoestrus interval, decreased use of hormonal intervention and increased submission rates and final pregnancy rates. 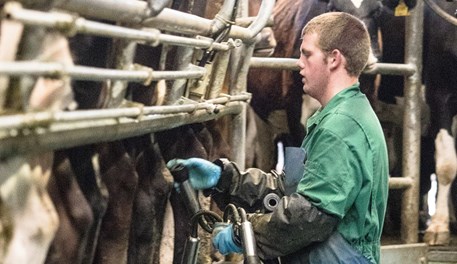 The options to reduce milk production and manage operating costs