The impact of the coronavirus pandemic has dominated global markets over the past month, and it remains a fast changing situation. Crude oil prices have tumbled below $30/barrel as the pandemic hits global economic growth and transport, reducing demand for oil. Meanwhile, sterling hit a 35 year low against the US dollar on 18 March as the UK government implemented measures to try and reduce the impact of the virus on the economy and health service. It also weakened 8.3% against the euro since our last report (21 Feb – 20 Mar).

All of this has considerable impacts on grain and oilseed prices.

Global wheat markets declined through the end of February and the first two weeks of March, but rallied in the third week of March. Prices were pressured by concerns about the impact of the coronavirus on demand, but later lifted on expectations that the lower prices would increase global trade and fears that the pandemic will cause logistical challenges.

It’s not clear what the medium or longer term impacts of the virus will be on grain demand and markets are currently trading day to day as new information emerges, with sometimes volatile movements.

Due to the large amount of maize used to produce ethanol, and the disincentive to use ethanol while the crude oil price remains low, maize prices have remained low during the period.

Global grain supplies remain good in the near term, and are soon to be topped up again as maize harvests progress in South America. Looking further forward, weather news is going to come thick and fast as normal for the time of year as spring planting progresses and crops develop across the Northern Hemisphere. However, there are questions about whether such news will get the usual amount of airtime, and so influence on prices, against the rapidly changing macro environment.

So far watch areas include:

For the UK, arguably the key influence on prices since our last report has been the significant fall in the value of sterling. Weaker sterling makes UK grain cheaper on export markets, and so domestic prices have risen in order to limit demand in view of the smaller wheat crop expected this year. In the weeks ahead, domestic logistics and demand will likely play a huge role in the direction of grain prices, along with currency movements.

As we move into unprecedented territory with coronavirus, the UK grain trade has come together to provide advice on the steps to take when loading grain on farm, into port, or receiving deliveries of inputs. The coronavirus guidance for combinable crop deliveries and collections is available here.

On top of the new challenges faced by the domestic supply chain, persistent rainfall has been a huge problem for many since October, hampering winter crop planting efforts. In response to recent flooding, Defra have announced a blanket derogation of the three crop rule this season. On top of this the Environment Secretary, George Eustice, has announce a Farming Recovery Fund for those seriously affected by flooding in particular parts of the country. You can read more on both of these elements here.

The derogation of the three crop rule could increase the likelihood that the planned 1.042Mha spring barley area gets planted. In turn, this could mean feed barley remains at a sizeable price discount to wheat in the months ahead.

Global oilseed prices fell sharply through the end of February and into March, due to a double whammy of impacts. The fall in demand for transport fuels because of the coronavirus pandemic directly reduced the amount of biodiesel (made from vegetable oil) that can be used. Lower crude oil prices also make it less attractive to blend biodiesel into transport fuels, unless it is compulsory to meet government targets. Because rapeseed has a higher oil content than soyabeans, this has hit European rapeseed prices harder.

From a UK perspective, weaker sterling makes UK rapeseed cheaper on global markets. As the UK has a continued need to import oilseeds and prevent exports because of the relatively small 2019 rapeseed crop, UK prices have fallen far less than European rapeseed prices. With an even smaller rapeseed crop expected in 2020, UK prices will need to remain above global levels to attract imports in the months ahead.

Also, as at 24 March, prices for oilseeds in general have picked up a bit. This is said to be partly due to buying by China as lockdown restrictions are eased in some areas and crushers look set to dial up production. In addition, with ethanol production in the US being scaled back, the volume of Dried Distillers Grains available for the US livestock sector is reduced, resulting in increased demand for soyameal.

However, the outlook for global oilseed supplies is currently good.

Soyabean harvests are underway in South America, increasing the supplies available to global buyers. While some forecasts for Argentina have been trimmed after the weather turned drier, Brazil is still expecting a record crop.

In addition, US farmers are expected to plant a record area with soyabeans this spring. We’ll get more information on US farmers’ planting intentions on 31 March.

Normally high supplies would keep global oilseed prices under pressure, especially with lower demand. At the moment, other factors may result in short term increases in price including the logistics and transport to move supplies to where they are needed, both globally and within Europe.

SPP continues to move up

The EU-spec SPP continued its upwards trajectory in the week ending 27 June.

Performance in the GB rearing/finishing herd 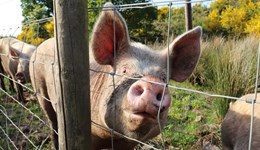