The British dairy industry could cut its costs by an estimated £3.5m per week with a different approach to milk production and, in particular, calving patterns, according to AHDB analysis. That is equivalent to 1.5ppl across all the milk in the country.

The AHDB Dairy 2015/16 Farmer Intentions Survey (FIS) shows more than 80% of farms are calving all-year-round (AYR) and only 4% are operating spring-calving systems. Eight per cent of dairy farms are considering changing their calving pattern, with more than half of those contemplating switching to an autumn pattern. In this article, AHDB looks at whether AYR really is the best option for the British dairy industry, and what the alternatives might deliver.

AYR calving farms tend to have higher costs of feed, vet, labour and youngstock. Typical costs for the different systems suggest there could be significant savings at individual farm level by switching away from AYR. The table below examines the difference in full economic costs of production between AYR and spring/autumn. Costs are based on the full economic figures averaged over the last five years.

The savings in block-calving systems are driven by more focused management to optimise some of the key drivers of production. This includes management of the calving window, fertility and grassland.

One of the key questions though, is what do processors want?  Typically, farmers have switched to AYR based on incentives and penalties from their milk buyers. In general, milk buyers are looking for a relatively flat milk production profile, and this has been achieved by incentivising individual farmers to keep milk production flat. Most milk buyers recognise that milk is pooled together to smooth individual peaks and troughs. However, the incentive schemes are still, on the whole, designed for farmers to look at individually.

AHDB analysis suggests that the same overall milk production profile can be achieved by combining milk from autumn-calving herds with milk from spring-calving herds.

The chart below compares the average production per farm from a typical AYR farm, with combined typical autumn and spring farms. The overall profile can be flattened further by combining the outputs from three farms; two autumn and one spring. 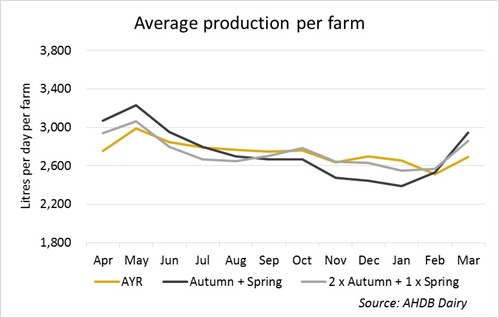 The conclusion is that GB’s flat milk production profile can be maintained even if farmers switch to autumn- and spring-calving, rather than AYR. Evidence suggests that this would also lead to an increase in the overall level of milk solids delivered in the milk.

If we assume the 80% of farms currently on AYR all switched, with half becoming autumn and half spring, and if we applied our five-year average cost saving to those farms, we could achieve a saving of £3.5m per week. With margins on farm still under significant pressure despite the recent upturn in dairy markets, a cost saving of this magnitude would go a long way to offering protection to the industry. All delivered for no marked change in overall milk output.

The challenge to milk buyers is, can you design a seasonality scheme to encourage this, rather than AYR? For farmers, don’t just focus on the bold seasonal incentives, look at the full economic position of each system. Then pick the one that best suits you and your farm.

More about Calf to Calving