In April, UK clean pig slaughter totalled 910,300 head, 2% more than in April 2019, according to the latest data released by Defra. With the same number of working days as last year, the uplift maybe due to processors encouraging producers to bring forward pigs close to finishing in early April. Nevertheless, we continue to see growth in throughputs despite industry report suggest tightening of supplies of finishing pigs.

Throughputs in Northern Ireland recorded a considerable uplift in April. England and Wales also recorded an uplift, although it was comparatively smaller. In contrast, slaughter in Scotland actually dropped back.

As such, in the first four months of this year, UK clean pig slaughter totalled 3.68 million head. This is 4% more (152,800 head) than in the same period last year. However, it should be noted that the higher slaughter in March alone accounts for over 55% of the uplift so far this year.

Finished pig carcase weights in April averaged 86.2kg, 1.0kg (1%) more than in the same month last year. While this is still ahead of last year, it is 0.4kg lower than average weights seen in March. A seasonal decline in weight is typically seen at this time of year. Nevertheless, this could also be due to processors encouraging producers to pull pigs near finishing forward when the quarantine measures were introduced at the end of March. As such, some of these lighter animals may have been still coming forward in early April, which will have reduced the overall average.

Slaughter of sows and boars recorded a significant uplift in April. Adult slaughter reached 22,500 head, 20% more (3,700 head) more than in the same month last year. This is the highest monthly throughput since January last year. With the cull rate relatively low across last year, the age profile of the herd will have risen. As such, we expected to see an uplift in culling rates this year.

The rapid escalation of the pandemic may have also given producers the incentive to adopt a harder culling policy. Sow prices have moved down and there are reports that highlight concerns over traditional end markets. Nevertheless, for some producers, taking a lower price may be more economical than keeping that animal on.

Finished pig prices continued to rise in the first quarter of 2020. However, an increase in feed and labour costs have eroded away some of the potential margin gains.

Total pig meat imports into Germany were 7% lower than a year earlier in the first quarter (-20,000 tonnes). 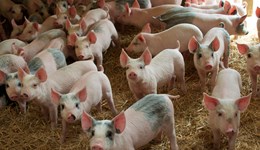 Pig prices rise across the board