The new year burst of AHDB Pork’s increasingly successful ‘midweek meal’ campaign is just around the corner, with health and taste at its heart.

This campaign, which began four years ago, relaunches on 16 January 2021 and will run for a six-week period, closing on 26 February 2021.

It will build on the campaign’s success so far and further enhance consumer attitudes towards pork, all in a bid to to bring longevity to the recent increase of sales within the category.

After an unprecedented year, a range of meat cuts, including pork medallions, have benefitted from consumers being increasingly housebound. More than 559 million extra meals have been “cooked from scratch” at home this year. [1]

This next phase of the campaign will bring pork medallions finest qualities to the attention of the British public through a nationwide TV advert. A range of follow-up social media activity will allow inspired consumers to access specific recipe ideas and incentivise them to share their experiences.

During the previous burst of activity in January 2020, the ‘Mix Up Your Midweek’ campaign reached a total of 26.3 million homes (94%) in the UK, with eight out of ten people saying the TV ad made them want to buy pork.

To encourage even more consumers to cook with pork, inspirational recipe kits are being sent to butchers and farm shops across the country. Each contains recipe cards and posters that promote pork’s abundance of flavour, as well as showcasing its health benefits.

AHDB Strategy Director for Pork Angela Christison said: “The pork medallion is officially recognised as being just as healthy as chicken breast, yet this has remained largely unknown until recently. We’re delighted that a growing number of consumers are building the habit of eating pork mid-week, enjoying its nutritious and flavoursome qualities in easy and versatile ways that really suit their way of life.

“From Piri Piri pork medallions to pork medallions ramen, there are so many options for consumer to enjoy the lean and tender nature of this cut.  Pork medallions are a star ingredient of so many world cuisines, quick and easy to prepare and they carry flavours beautifully.”

Britain’s growing embrace of pork medallions is reflected through the rise in sales nationwide, with numbers up 36 per cent since the onset of the campaign.

Furthermore, pork medallion sales are contributing to pork’s increasing regularity in midweek meal routines across the country. An extra one in ten British households are now making good use of pork’s qualities throughout the week.

At lovepork.co.uk, there’s a range of pork-based recipes and how-to guides that can help bring excitement and enjoyment to your cooking at home throughout week. 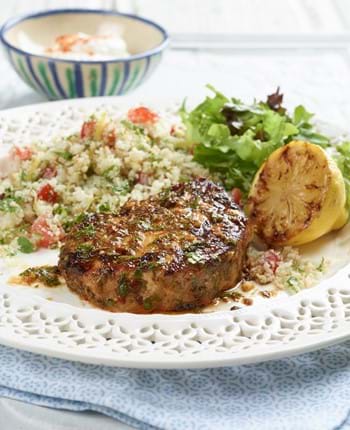