Is barley at risk from cheap maize?

Today’s extended GMD is focusing on the large volume of UK maize imports, large South American maize supplies and a big export campaign for Black Sea maize. It is likely that these factors will contribute to increased pressure for UK barley prices over the remainder of this season, with barley prices already fighting to stay competitive.

Is barley still at risk from cheap maize?

During the wet winter, and into the New Year, a lot of the price risk for barley we’ve been discussing has come from increased threat of a large spring barley crop. This remains a very prevalent threat. However, another factor comparatively flying under the radar is the continually high level of maize imports coming into the UK.

Last season’s imports were financially justified, with barley prices astronomical through the early part of 2018/19. However, with an 8.05Mt barley crop in 2019/20 pricing very competitively at a discount of £24/t to wheat (ex-farm East Anglia, Spot), a high volume of maize imports poses a significant price risk if they continue.

So what is the likelihood of this trend increasing?

Global maize prices remain very cheap, Chicago maize futures (nearby) are currently pricing £35/t under UK feed wheat futures (nearby). While this discount is not as big as it was this time last season, it remains at a level which is likely to continue incentivising maize imports.

There are a number of important points to consider in maize markets at the moment. The first of these is the size of the Brazilian maize crop. We’ve covered the weather challenges for maize quite a lot in recent weeks, but despite the potential for delays in planting of the safrinha crop, this week’s Conab production forecast upped the estimate for the second crop by 2.3Mt.  Last season the UK imported 10% of its maize from Brazil, so it’s definitely a crop worth keeping an eye on.

Elsewhere, FranceAgriMer has upped its expectations of maize stocks by 0.1Mt, to 2.2Mt. Meanwhile, Stratégie Grains are currently forecasting an increase in maize production in the EU in 2019/20, further pressuring the maize market.

Finally, Ukrainian exports are still going strong. So far this season 349Kt of domestic maize imports have come from Ukraine, a trend that could well continue. In July to February, Ukraine has shipped 16Mt of maize, with UkrAgroConsult forecasting total season exports at 29.8Mt.

There could yet be more pressure for global and Black Sea maize prices, with 14Mt of Ukrainian maize to be exported in the remaining 5 months of the season. Additionally, there could be potentially large supplies to come out of South America also.

This potential pressure for maize prices will likely continue to weigh on domestic barley prices to remain competitive. 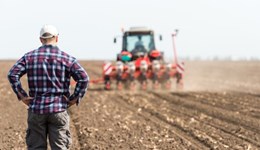