Spring block calver Keith Davies manages 1,000 Jersey X cows at Lydney Farm in Gloucestershire on an intensive pasture-based system, milking once-a-day. He tells us how he’s been affected by the recent heavy rainfall.

We usually graze the cows when calving starts in February and they’re are out until December. We operate a low input system, focused on managing costs with low yields of around 3,750 litres per cow.

The farm sits in low lying flood plain separated by dykes from the River Seven. Pumps raise water over 12 feet to the other side of the dykes when we need to remove any excess.

Since the last week of September we’ve had over 400mm rain, more than twice the normal volume. We haven’t been able to pump the water out fast enough and nearly 60% of our grazing platform has been under water. To make matters worse, the pumps failed and as soon as they were fixed it rained again. Our fields have been submerged for most of November.

We brought the milking cows in at the end of October but we only have enough housing for 700 cows so dried off the low yielders and grazed the remaining 300 on paddocks that aren’t flooded.

Average covers were 2,500kg dm/ha before the rain and we’re using the dry cows to graze them down to our closing target of 2,200kg dm/ha. Poaching hasn’t been an issue but we’ve fed 1,000 tonnes of silage, double the usual amount and we’ll buy in chopped straw if needed for dry cows.

We’ve probably lost 30,000 litres by drying off the cows early, but the big cost will be paying to reseed the 20 hectares that’s been underwater, almost permanently, since beginning of October.

The performance characteristics of grass and clover varieties 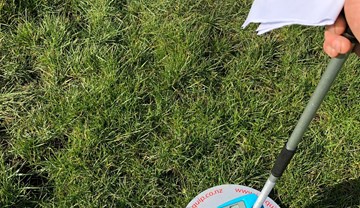 The latest research and advice on grass, forage and soil management to help improve grassland productivity

Videos to help you get the most from soil, nutrients and reseeds