Many foot conditions in dairy cows can be caused by a combination of several factors, but it is often possible to identify the major causes in many instances, particularly where the problem is particularly prevalent on a farm.

Sole ulcers, white line disease and digital dermatitis as recognised as 'the big three' mobility conditions seen on dairy farms in the UK, but there are several other common problems seen on a regular basis.

Several different lesions and problems can be present on a single foot at any one time. More severe problems, involving deep joint infections and necrotic toes, for instance, must be dealt with by the vet.

It is important that herdspeople can distinguish between the various problems, even if a foot-trimming specialist is used or the farm vet routinely examines lame cows. Some conditions, such as digital dermatitis, may be due to infectious illness where prompt attention can easily control the potential spread of infection.

Sole ulcers are a very painful type of non-infectious hoof lesion - usually located where the sole and heel bulb meet - where infection forms between the sole and the underlying tissues. They arise when the soft tissues inside the sole are damaged and normal horn cannot be produced for a number of reasons, but are often associated with trauma from stone bruises, for instance, and can cause severe mobility problems in dairy cattle. Sole ulcers can also be related to bleeding associated with sole bruising.

There is usually a time lag between the initial trauma and the development or observation of the sole ulcer lesion. Sole ulcers are often seen directly under where the pedal bone would sit, but hoof horn grows at a rate of around 5mm per month; the sole of the hoof is approximately 10-15mm thick, thus the trauma event causing the bruising is likely to have occurred up to three months earlier.

Sole ulcers commonly affect one or both of the outer hindclaws, particularly in bigger, high-yielding dairy cattle kept under conditions where cow comfort is poor. Where both hind feet are affected the symptoms may be masked. Sole ulcers are also common in dairy herds in which animals are managed in loose-housing systems with poor hygiene conditions.

If the corium is exposed, infection can enter the deeper structures of the claw and spread, causing serious problems and allowing abscesses to develop.

White line disease is a non-infectious condition that occurs when the sole separates from the side wall of the hoof, allowing foreign material to penetrate and infect the white line region.

The white line is easily damaged and is often an entry point for infection; tracks of infection may cause a localised abscess, or may penetrate to form a deeper abscess, and solid foreign bodies may lodge in the softened, widened area and may push through to the sensitive corium beneath. Exposure to moisture softens the region still further and any rupture of the structure is worsened by the impact of movement, particularly among animals housed on concrete.

White line disease is a major cause of lameness with the incidence in older cows being as high as 35%. The outer claw of the hindfoot is usually involved; where both claws are affected the problem may escape notice until lameness is more obvious in one limb than the other.

The degree of pain and lameness depends on the rate of development and the extent of the abscess; a discharge of pus from where the skin and horn meet is always reason to suspect a white line lesion and the white line should always be examined very carefully in cases of lameness with these symptoms.

The region of the wall of the hindlimb most often affected is the area of the claw that absorbs the concussion from walking first and in which horn growth and wear occur the most. Exposure to moisture from wet conditions underfoot softens the tissues still further.

Digital dermatitis is a particularly infectious condition that can spread quickly through the herd. It produces painful lesions on the soft tissues between the claws and the heel, although occasionally it occurs on other soft parts of the foot. Cows often walk very tenderly on the affected feet, sometimes giving the impression that they are walking on 'tip toe' in order to avoid touching the ground with the painful affected area of their hoof.

Sole bruising is characterised by the presence of red and sometimes yellow marks or areas on the sole, and often occurs where the sole is particularly thin.

Any disturbance in blood flow to the corium can result in the necrosis of the corium tissues, bleeding and swelling - often referred to as 'laminitis' - which eventually manifests itself in areas of sole bruising. It can also lead to separation of the soft tissues of the foot and the pedal bone can become misplaced, compressing the soft tissues within the foot, causing sole ulcers. The clinical signs may be observed in calves fed diets that are too high in concentrates at six months of age, which predisposes them to more severe sole problems as they mature.

Bleeding and necrosis of the corium are seen most often in the white line area of the claw. This bleeding will not become visible until it rises to the surface of the sole after a few weeks; minor signs of bruising are often not noticed until after repeated episodes have occurred and it becomes a chronic issue. Once a cow experiences sole bruising, her foot is not likely to recover fully and may become a source of future problems.

Cattle with chronic sole problems (a condition known as slipper foot) can have overgrown, disfigured hooves. This abnormal hoof growth can lead to uneven hoof wear which predisposes the cow to many other mobility problems. Because the outside claw of the rear foot is most often affected, cows with slipper foot are often recognisable as they tend to stand 'cow-hocked'.

Horizontal fissures run parallel to the coronary band and result from the disruption of horn production beneath the coronary band, resulting in a defect in the integrity of the wall, which can vary in its severity from a shallow groove to a complete break in the wall. The defect could be as a result of a period of nutritional deprivation or psychological stress. As the claw grows, a fracture can occur at the weakened point resulting in a 'broken toe', and a series of grooves can undermine the vertical strength hoof wall causing it to bend , producing a 'buckled toe'.

Vertical fissures (or 'sandcracks') account for a very small proportion of mobility problems in dairy cattle, and unlike other foot problems they tend to develop more in the foreclaws. Sandcracks vary in their severity depending upon size and where they are located, but rarely cause significant mobility problems. They are associated with cows kept in hot, dry and sandy conditions - as their name suggests - and are unlikely to be a problem in UK herds.

Heel horn erosion, or 'slurry heel', is recognised by the damage to the surface of the bulb of the heel. Actual evidence of mobility problems due to the condition may not be present unless it becomes severe. It is often linked to interdigital dermatitis, in that both conditions are prevalent under poor hygienic conditions in housed dairy herds and tend to be particularly found towards the end of the winter.

In intensively managed dairy herds, particularly where subclinical laminitis is often present, the soft horn covering the bulb becomes vulnerable to direct bacterial attack, principally from pathogens existing in slurry and muck, as well as damage from a variety of irritant chemicals also present in slurry. Standing in wet conditions also softens hoof horn, particularly heel horn, and makes this region of the foot even more vulnerable.

Pitted and damaged areas of the sole facilitate the bacterial invasion into the heel area and a massive destruction of the horn of the heel can occur. In some cases, ridges, layers, and deep black and concentric grooves are seen in the heels.

The erosion of heel tissue interferes with the hoof's shock absorption properties, and as a result the cow throws more and more weight further forward, altering its gait and causing more pressure to be placed on other parts of the foot; a common concurrent lesion is a sole ulcer due to the altered gait.

An interdigital growth, or 'interdigital hyperplasia', is a firm tumour-like mass of tissue that grows in the space between the claws. It is believed to be caused by the continual exposure to slurry, any chronic irritations or dermatitis in the skin between the claws. Varying degrees of lameness can be caused by these growths; larger growths tend to be more painful, and may become infected with other diseases such as foul-in-the-foot.

Foul-in-the-foot occurs when the skin in between the claws becomes damaged and a bacterium called Fusobacterium necrophorum infects the soft tissue between the digits, although other bacterial species have been linked to the condition. A painful swelling of the foot between the claws and around the adjacent coronary band occurs rapidly and the inflammation may extend to the pastern and fetlock. Other symptoms caused by the illness include pain caused by the pressure of the swelling, severe lameness, fever, and a reduction in milk yield.

More than a single foot is rarely involved at the same time in mature cows but foul can occasionally develop in several feet in calves. As with most foot conditions, the hind limbs are more likely to be affected. The claws are typically markedly separated, with the swelling uniformly distributed between them. As necrosis of the skin progresses, sloughing of tissue and the discharge of pus is likely to follow, and the condition produces a characteristic odour.

Open lesions can be infected with secondary pathogens, complicating treatment and recovery. Severe cases can result in permanent damage to milk yield in the current lactation even if the foot recovers. 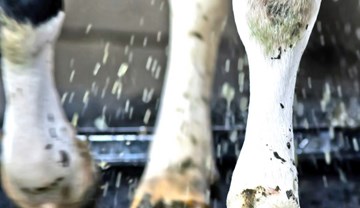