About The Plum Demonstration Centre

The Plum Demonstration Centre is a centre of excellence for Tree fruit growers to show best practice, the latest practical research and to implement new technology.

Several new plum orchards have been planted in partial fulfilment of an Innovate UK (IUK project), located in Kent following the completion of a four-year project on plums.

AHDB is part-funding one of these at NIAB EMR to demonstrate some of the outcomes from the research project on ‘Sustainable increase of UK plum production’.

The project focused on enhancing yields, reliability of cropping, extending the production season from July to October, and improving fruit value by raising the quality of the fruit being marketed and consumed.

The results of the project are now available to the industry in a new Plum Best Practice Guide that can be found on NIAB EMR’s website here.

The activities and work programme at the centre are discussed with the centre steering group during the winter months. The aims are to demonstrate ‘best practice’ in plum production, ‘best practice’ in crop and environment management and to compare different production techniques. The work programme agreed by the steering group in 2021 continues much of the work begun in 2019 and 2020 with some new additions and is summarised below.  This work programme was discussed more in a podcast.

The performance of Victoria is being compared on four rootstocks (four replicated 5-tree plots) of varying vigour including VVA1, Wageningen, Wavit and St. Julian A. The planting allows replicated comparisons of the performance of Victoria including tree size/vigour, flowering time, ripening time/season, disease susceptibility, productivity and fruit size and quality.

The performance of Victoria is being compared on different training system/rootstock combinations (Narrow table-top, Narrow A frame, Oblique spindle and Super spindle on rootstocks VVA1, Pixy, Wavit and St. Julian A) and two single rows of Victoria are also being compared on Fan and Candelabra systems.

In 2020, 23 new selections and varieties were planted in a dedicated variety trial plot to gather yield and quality data from a range of varieties that will extend the season from the start of July until the end of September. This includes varieties in the table which are compared to Victoria as the standard.

Interestingly, following the IUK funded plum project, three other trial orchards were planted by commercial plum growers in Kent to showcase different plum varieties. These include A. C. Hulme & Sons (early varieties), Highwood Pluckley Ltd (late varieties) and G. H. Dean (varieties with high yield and quality potential). All three growers are willing to share their experiences and findings with the industry.

An area at the centre has been set up to demonstrate the difference in performance of Victoria grown under polythene clad multi-bay tunnels compared to unprotected Victoria.

A number of mechanical aids for thinning flowers and controlling weeds in the crop row are available to growers in the UK. These and other machines will be demonstrated in open events for growers to view their performance. Where available, video demonstrations will be up-loaded to the Plum Demonstration Centre website for viewing.

Demonstrating the use of root-pruning for vigour control

Root pruning will be demonstrated by assessing half a row of root pruned versus half a row without. The effects on tree vigour will be recorded. This work takes place in fan-trained plums every July.

Comparison of irrigation and fertigation programmes

Soil matrix potential sensors have been installed in five rows of Victoria on Wavit rootsocks, which will allow them to trigger trickle irrigation when the soil reaches water deficit set points. Irrigation is being triggered initially when -50 Kpa is reached, then gradually reduced to -75 and then -100 and irrigation will only be applied when this threshold is reached. Half of the rows will be irrigated this way and compared to the other half, which will be irrigated routinely around 1 hour every day.

Fertigation programmes developed by NIAB EMR in consultation with Yara are being employed at the centre. In a comparison of two different approaches, half of the trees are  treated with the fertigation programme throughout the growing season and half are treated only at times during the season when the trees are known to respond to fertigation. A long-term comparison of growth and yields will be made. This work will also draw upon the results of AHDB Projects TF 198 and TF 210 along with the EU Fertinowa project.

Comparision of the use of organic mulches

Many commercial growers now use organic mulches in the tree row to suppress weeds, conserve soil moisture and improve soil texture and soil structure in the root zone. A long-term comparison will be made of trees treated with organic mulch and those not treated.

Results of AHDB funded research projects on preservation of earwigs in orchards (TF 196, TF 220 and TF 223) and conservation biocontrol are being  implemented at the Centre. This includes implementing ‘earwig-safe’ spray programmes, deploying earwig refuges, employing wild flower strips around the centre and between crop rows (in certain areas) and the use of beetle banks. The numbers of earwigs and pollinators are being assessed and recorded. Comparisons of earthworm numbers are  also being made between bare soils, grass strips and wildflower areas. 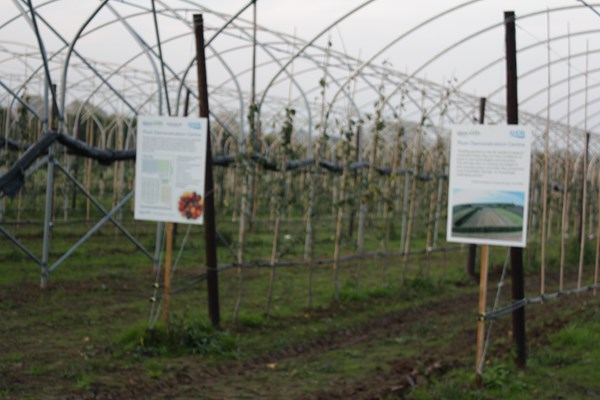 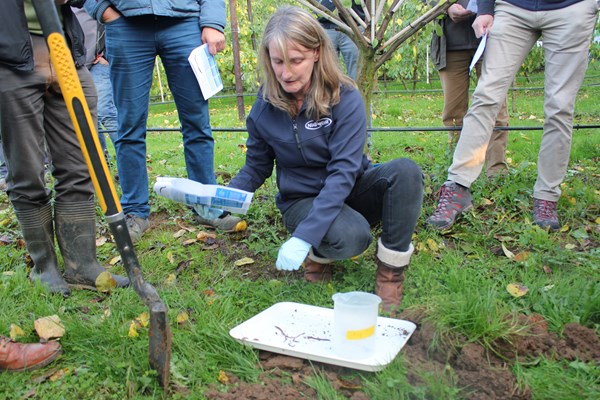 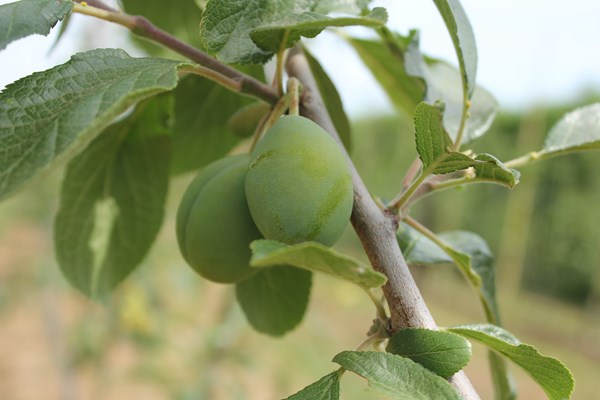 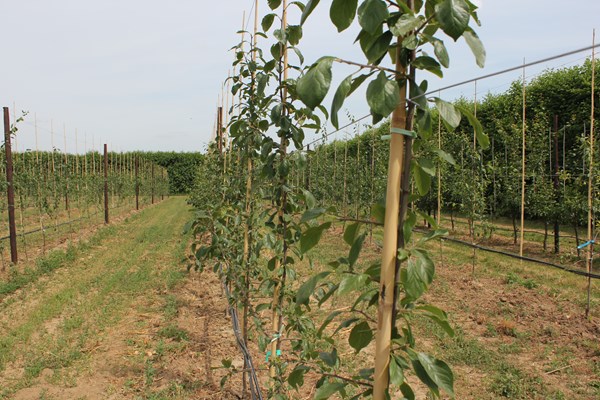 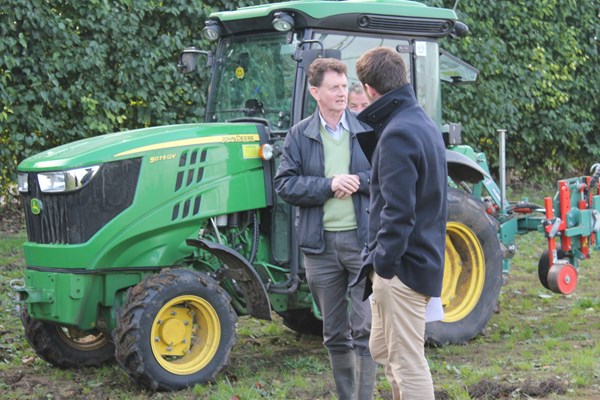 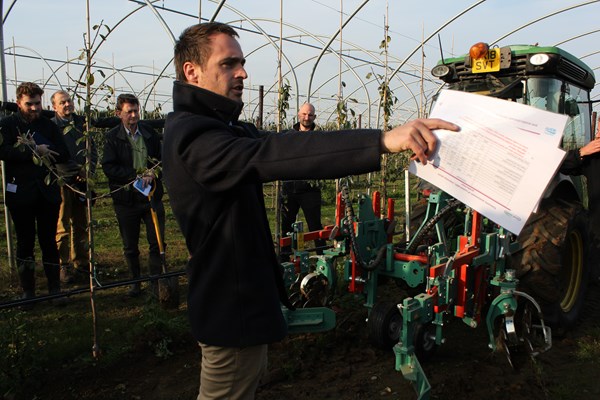 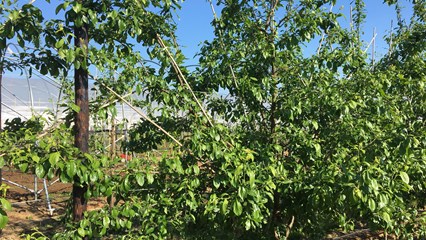 Results of experimental plantings and demonstration plots in 2019 and 2020

New centre to increase the sustainability & productivity of tree fruit

A Plum Demonstration Centre will now receive funding from AHDB to demonstrate ‘best practice’ and increase the use of new technology by tree-fruit growers. 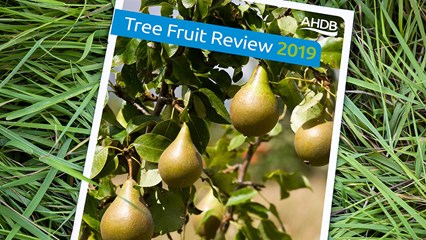 Find out about the latest research for tree fruit crops