About Strategic Centre for Field Vegetables - Peas and Beans

Work Programme and results for the 2019/20 season

In 2019/20 the Strategic Centre for variety trials and bean seed fly field trials conducted by PGRO.

For the full report on each work area, go to the Strategic Centre for Field Vegetables project page.

The Legume Industry Panel has identified varietal selection as an important and key element of crop production and requires an accurate guide to the performance of varieties in areas typical of pea production. Priorities also include the development of novel products to help mitigate the effects of continued loss of active substances to manage key pests and diseases.

For the full report on each work area, go to the Strategic Centre for Field Vegetables project page.

Varietal selection is an important and key element of vining pea crop production to ensure a programmed harvest period and to maintain high quality produce. Vining peas are grown commercially in strict schedules from drilling to harvest and selection of variety is critically important to allow growers and processors to manage programs effectively. This enables a high degree of harvest and processing planning and the spread of workload both in the field and in the processing factories. Any disruption to factory process leads to large additional costs or losses. The period of harvesting and processing is from mid-June to the end of August in the UK, and varies depending on regional differences in environmental conditions.

In practice, commercial programmes are based on the use of a minimum of four varieties and it is more likely that six or seven will be used to give a spread of maturity and to allow production for special markets.

Despite the weather conditions in the 2020 growing season, the yield standard Oasis yielded well, 9.05t/ha at TR105, with a moderate increase to 10.55t/ha at TR125. Oasis, a vigorous leafy variety often performs well in these conditions and less well in fertile wetter conditions.  In the wetter 2019 season some varieties out-performed Oasis, but in the difficult 2020 season many varieties were lower yielding by comparison. Yields and maturity for Avola are based on a single harvest at around TR105. Consequently no maturity comparisons can be made against Avola at TR125.

Establishment difficulties has led to some missing data for some varieties. There are number of consistencies in the 2019 and 2020 data, but it would of benefit to repeat the trial again 2021.

Bean seed flies (Delia platura and Delia florilega) are small flies which are closely related to the cabbage root fly and onion fly. The larvae feed on a wide range of crops, affecting more than 40 different host plants, which they usually attack during germination, reducing emergence and therefore causing serious economic losses. Host plants include bean, onion, cucurbits, spinach, brassicas, radish, beet, asparagus, sweetcorn, cereals and clover. They can occur as secondary pests and have a wide geographic distribution.

Furthermore, due to the loss of plant protection products, bean seed fly is becoming increasingly difficult for growers to control. It was for this reason that growers decided to prioritise bean seed fly for Strategic Centre grower led activities.

As part of Strategic Centres, PGRO have developed an app which now includes a section in which growers and agronomists can record the incidence of bean seed fly larvae in any crop. This provides information about the distribution of the bean seed fly across the UK in all affected crops and will help the development of solutions to combat the pest.

A survey of pea crops carried out in 2019 by PGRO, Swaythorpe Growers and Stemgold Peas indicated that the period between spring cultivation and drilling peas was an important factor affecting damage to plants by bean seed fly larvae, with a period of around 14 days leading to reduced damage levels compared to cultivations taking place at the same time as drilling. This finding is supported by literature that cites conservation tillage and reduced cultivations to help manage damage to crops by bean seed fly larvae.

This trial aimed to determine whether cultivation timing may be used as a cultural method to help manage damage to crops by bean seed fly larvae, and the minimum period between cultivation and drilling to lead to optimum reduction of damage.

A period of at least seven days between cultivation and drilling vining peas helped reduce damage to vining peas from bean seed fly larvae. At earlier crop growth stages, damage was reduced from 19.87% to 1.06% by leaving a period of 21 days, saving approximately £350 per hectare in potential losses.

Bean seed fly activity has been monitored closely this season, with results available in the Pest Bulletin.

An online meeting was held to provide an update on research on bean seed fly undertaken this year at Warwick University and PGRO. This includes the PhD funded jointly by AHDB, PGRO and Warwick (Becca McGowan).

There was an opportunity for participants to contribute and discussion about the way forward. 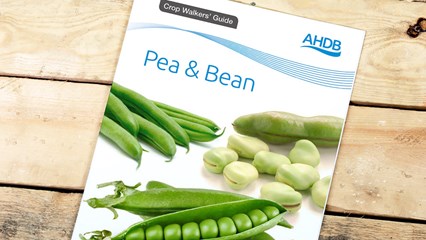 This Peas and Beans Crop Walkers' Guide is aimed at assisting growers, agronomists and their staff in the vital task of monitoring crops. It is designed for use in the field to help with accurate identification of pests, diseases, nutrient deficiencies and disorders within a crop.

Biennial conference for the vining pea and bean industry

The pea aphid is a major pest in vining and fresh market peas and attacks by this pest can result in loss of yield by flower spoilage causing the failure of pods to fill, and by virus infection. Serious yield losses up to 45% have been reported in vining peas for freezing..

The caterpillar of the silver Y moth feeds on foliage and pods and can cause a degree of defoliation when infestation levels are high. However, the main problem occurs when the caterpillar becomes a contaminant in vined peas, or when feeding damage to pods of fresh market peas or beans makes them unmarketable.