Our storage webpages are currently being updated to become part of the AHDB Potatoes legacy website. This may mean there are temporarily broken links or information that has moved. If you can’t find information that you’d previously used on the site please contact Sue.Cowgill@ahdb.org.uk

Information and video material on sprout control and related issues

Sutton Bridge has been the centre of research and knowledge exchange covering all aspects of potato storage since 1964.

The site started as Sutton Bridge Experimental Station run by the Potato Marketing Board (PMB). Initially, the focus was on storing potatoes in buildings rather than field clamps. This moved on to gaining better control of the in-building environment through the use of ventilation systems and post-harvest chemical treatments in large-scale commercial trials.

In the early 1980s, the research spotlight moved to achieving more precision in the storage regimes. Much was learned about the problems of cold temperature and senescent sweetening. Use of chemicals was also commonplace with products such as thiabendazole, tecnazene and CIPC widely employed for disease and sprout control.

Work under the PMB continued through into the 1990s with new stores built in 1992.  Work included the development of diagnostic testing and the assessment of novel sprout suppressants (including carvone and DMN). Development of refrigeration and atmospheric control were also areas of focus. In 1996, under the auspices of the British Potato Council (BPC), the facility became Sutton Bridge Experimental Unit and began carrying out private contract research alongside the levy-funded activity.

Work in the late nineties and early in the new millennium focused on black dot control for better quality in the fresh sector and an improved understanding of fungal populations affecting seed and ware. The period also saw a move away from ‘old school’ chemistry to look for better ways to use the chemical portfolio more efficiently and effectively. The trials proved valuable to support the industry’s move into CIPC stewardship.

AHDB was formed in 2008 and in 2014, in its fiftieth year, the unit became Sutton Bridge Crop Storage Research (SBCSR ) and launched the ‘Storage 2020’ programme looking to enhance the standard of GB storage by the end of the last decade. The widespread adoption of affordable inverter technology greatly facilitated this and was a boon in reducing reliance on CIPC as active recirculation became the ‘norm’ for application of sprout suppressant before its demise in 2020. A major AHDB levy-funded research programme was the focus of work at SBCSR until 2021 which was designed to support the industry’s transition from CIPC to storage using other solutions.

Assess your costs with this spreadsheet template 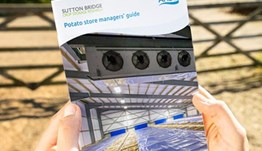 The final reports from the levy-funded research programme from the millennium onwards are available via the index pages below.