At harvest, potatoes are usually dormant and sprouting does not occur, even under conditions favourable for growth. The period of dormancy varies considerably by variety and season. Variety selection for long dormancy, can be a means to reduce post-harvest chemical use in storage.

After break of dormancy, sprouts grow at a rate primarily determined by temperature, with high temperature promoting rapid sprout growth.  For storage of seed and ware potatoes a low storage temperature is usually selected. This is primarily to reduce disease ‘pressure’ but it can additionally avoid or reduce the need for sprout suppressants. To avoid the use of sprout suppressants entirely, storage temperatures need to be consistently below c. 3°C. Potatoes held at such cold temperatures however may be affected by low-temperature sweetening which can adversely affect taste, texture and colour on roasting/ frying.

Temperature control alone is not generally effective and many potato crops will require treatment to restrict sprout growth in store. In GB, approvals for growth regulators are the responsibility of the Chemicals Regulation Directorate, a division of the Health and Safety Executive. Their website should be consulted to see what products are currently approved.

At the time this page was written, there were four growth regulators approved for use as sprout suppressants on stored potato: Maleic Hydrazide (MH), ethylene, orange oil and spearmint oil. Other active substances available elsewhere, or in the regulatory approval process include 1,4-dimethylnaphthalene (registered in the EU as 1,4-SIGHT) and 3-decen-2-one (registered in the USA as SmartBlock).

Prior to its last use in 2020, chlorpropham (CIPC) had been the most important sprout suppressant in GB. AHDB had supported an extensive programme of research on its use.

Maleic hydrazide (MH) is available in a number of formulations for crop or non-crop uses. For sprout control in potato storage MH is unusual in that it is applied as a spray to the leaves of growing plants, and translocated to the tubers. All MH formulations for potato deliver 3kg active substance per hectare and only one application is permitted. There is a Maximum Residue Level for MH in potatoes (60 mg kg-1).

Ethylene is a gaseous plant hormone that can elicit a wide range plant responses. In potato storage it is used to control sprout growth in non-dormant crops. It is intoduced into stores, either via a catalytic generator that produces the gas, or a control system for introducing the gas from cylinders. Ethylene was used primarily for storage of fresh pre-pack potatoes but, since the non-renewal of CIPC, is increasingly used for processing crops. There is no Maximum Residue Level for ethylene in potatoes.

Spearmint oil is extracted from the spearmint plant (Mentha spicata) with active substance R-carvone. One formulation is available, BIOX-M. Although it can be applied in different ways, in GB applications are as a ‘hot fog’, usually applied by contractor. Spearmint oil ‘burns’ back sprouts. Spearmint oil was an established treatment in storage for the fresh, pre-pack sector and was widely used on processing crops for the first time in 2020-21. There is no Maximum Residue Level for spearmint oil/carvone in potatoes

Orange oil is extracted from oranges and has the active substance limonene. One product is available (Argos) applied as a ‘hot fog’. The first commercial uses of orange oil in GB will take place in the autumn of 2021. There is no Maximum Residue Level for orange oil/limonene in potatoes.

In 2021, 1,4-dimethylnaphthalene (DMN)  was not approved for use as a sprout suppressant on potato in GB. It is a naturally occurring compound and is usually applied as a hot fog.

Prior to non-renewal, chlorpropham (CIPC) was the most important sprout suppressant. At its peak, CIPC made up in excess of 90% of pesticide treatments to stored potatoes. It was considered to be a particularly effective treatment. Research examining alternatives to CIPC found combinations of active substances often gave best sprout control efficacy.

Storage of varieties with long dormancy and low temperature tolerance can be used for ‘integrated control’ of sprouting and reduced chemical inputs. But crops must be segregated into stores using these characteristics. For example, mixing short and long dormant varieties in one store does not allow the cost-benefit of long dormancy to be exploited. 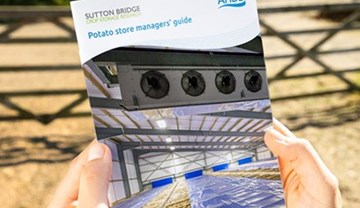 Back to the Storage Hub