Performance of some of the most popular varieties were assessed with demonstration trials held by the AHDB at Eurofins in 2019.

Twelve varieties with resistance scores against foliar blight ranging from 2-9 were planted in two blocks in increasing order of resistance. One was treated with a strong fungicide programme and the other with a shorter and simpler spray regime.

Varieties included Russet Burbank, Maris Piper and Markies, amongst others, which on a site which was inoculated with blight strains 6_A1, 13_A2, 36_A2, and 37_A2.

David explained: “We know that chemistry is doing a lot, but we wanted to chart how close to their resistance rating they are when under extreme blight pressure.”

When a full fungicide programme was used, all performed well, but when this was reduced to three applications of Dithane, and three of Curzate, real differences were detected, he said.

“Orchestra, which has a 2 for foliar late blight resistance, showed 75 percent foliar infection, Maris Piper, with a 4 rating, 60 percent infection, whereas Markies, which has a rating of 5, had 15 percent.”

There had been complications with two new coded varieties which had suffered defoliation despite having a high blight resistance score. However, further investigation showed this had been due to  infection by Alternaria, he noted. 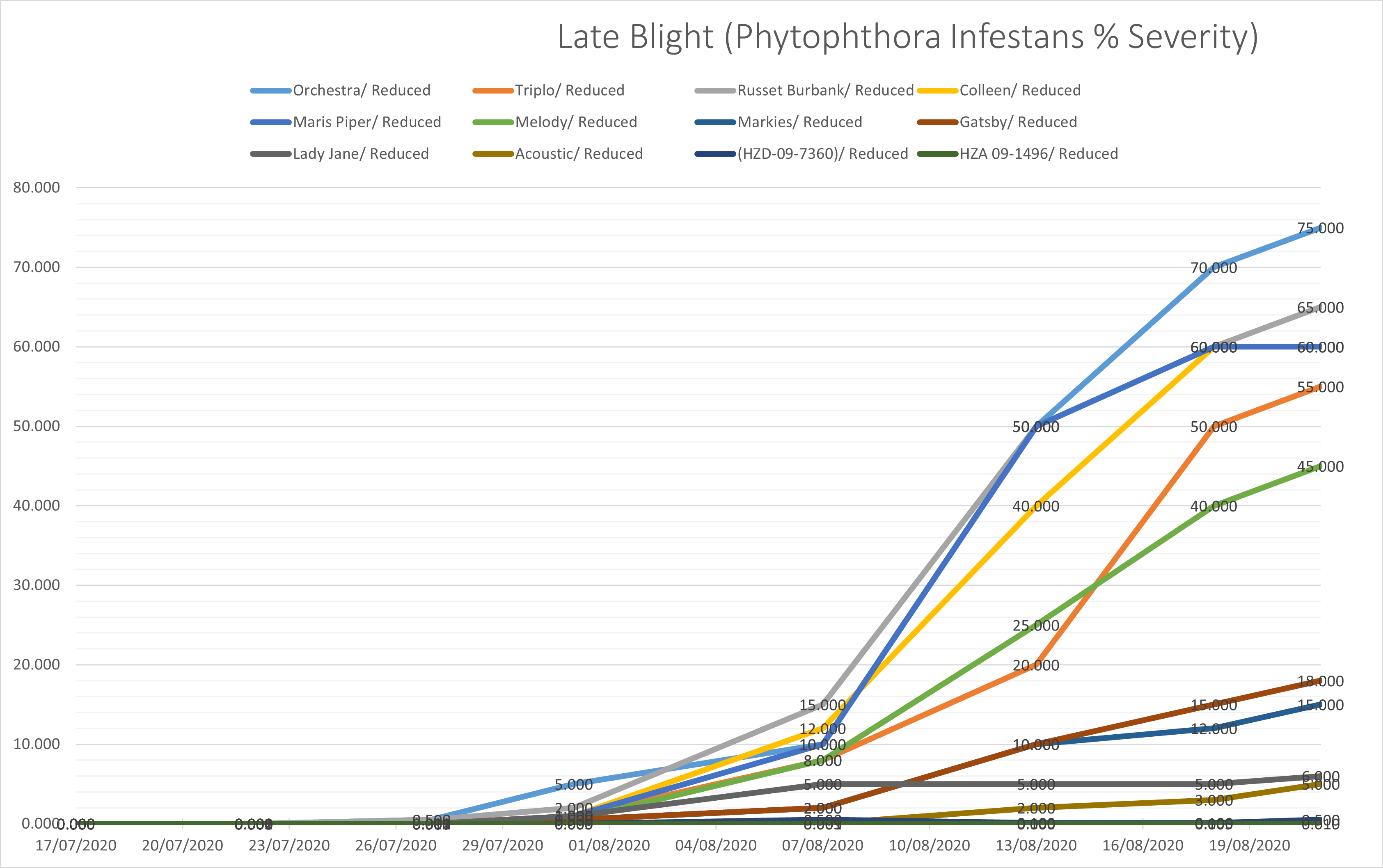 “These trials highlighted real differences which can help growers and agronomists make decisions on which field might be better to grow a particular variety, specific when they are on rented land.”

He also suggested  growing varieties with similar blight ratings in blocks, which could be helpful to designing spray programmes, and when the going gets tough and it is difficult to maintain spray timings, which one to spray first.

“The demonstration trial highlighted the importance of foliar resistance ratings. For example, Maris Piper is rated at 4, and Markies 5, yet when fungicide applications were reduced, on 21 August measurements showed Maris Piper had 60 percent defoliation, whereas Markies had just 15 percent.

“As these two varieties are commonly grown on the same farm, this knowledge could help agronomists and growers make their decision on which variety should take priority.”

However, he added, this may be cases when this would need to be dictated by field and tank size.

“All new varieties undergo rigorous testing at SASA for resistance before they are approved for National Listing.

“However, some of our popular varieties, such as Maris Piper, have been around for a long time, and these trials were very useful because they demonstrated that the resistance scores they were assigned are still appropriate in spite of changing blight genotypes.”

Seven resistant genes in the battle against late blight

Seven genes with broad spectrum resistance to late blight have been identified as useful for breeding into potato varieties, revealed senior scientist Jack Vossen from the University of Wageningen.

Six of these resistance (R) genes have already been used in current varieties, such as Sarpo Mira, Vitabella, Carolus, Avito, Alouette, and Acoustic and there are others in the pipeline. 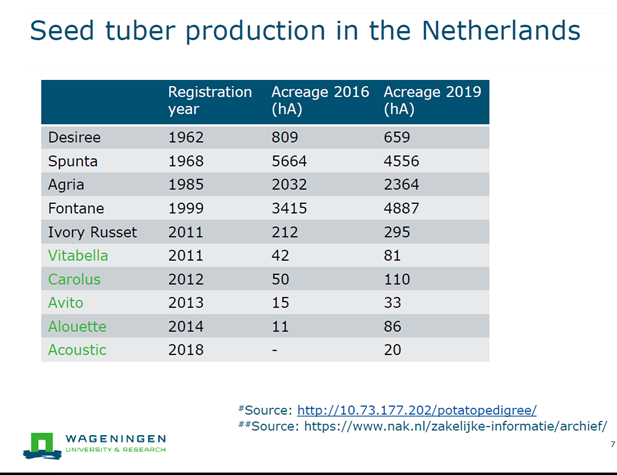 This may mean more durable late blight varietal resistance could be on the way. There are two main ways to show the presence of late blight resistance genes in varieties: responses to P. infestans effectors and DNA markers.

Pathogens secrete effector proteins which alter the potato host to the pathogen’s advantage. Resistant potatoes have immune receptors to counteract the effectors. Different responses of different varieties to the Phytophthora proteins indicate which gene, coding for the immune receptor, the resistant variety carries

However, breaking through the system to get a new variety accepted by customers can be slow, and   the acreage used for varieties with these R genes is still small, he said.

One of the challenges of late blight is its ability to re-invent itself and break down resistance, and the speed of breakdown of varietal resistance is of great concern to the industry as it can happen within one season.

Inserting more than one gene capable of resisting late blight (stacking) means there is a back-up even if one resistance gene in the variety subsequently become vulnerable.

In plants with R gene stacks, the chance for resistance breakdown within one season was drastically reduced. The survival of the resistance breaking isolate to the next season has thereby become less likely, thereby enhancing resistance durability, he said.

Application of low doses of fungicides as part of decision support systems is a complementary way to prevent the building up of large amounts of virulent spores. In addition, varietal resistance can prolong the efficacy of active ingredients.

“Using varietal resistance could be a good foundation not only for successful Integrated Pest Management (IPM) strategies. It is also likely to help keep the efficacy of active ingredients for longer.”

Over an unusually dry 2020 season, just under 100 outbreaks were sampled and genotype 6_A1 was found causing around one third of crop infections across large parts of the country, revealed Dr David Cooke, Research Lead at the James Hutton Institute for AHDB’s Fight Against Blight.

The two newer invasive clones made up 40% of the population with three times as many 36_A2 types sampled than 37_A2 with a slight increase in the proportion found in 2019. The previously dominant genotype 13_A2 (also known as Blue 13) was found only once during the season, so it appears to be on its way out, he said.

David said: “Over the past four years a clone that was first found in North Wales and now named as 42_A2, has spread to crops in Shropshire,  Cheshire and Lancashire.

“Its frequency has remained low and it does not appear to present a specific threat. As in previous years clusters of novel genotypes have been sampled in North East Scotland.”

Late blight lived up to its name of ‘late’  in 2020.  A dry warm Spring suppressed the disease, and even unsprayed areas of susceptible volunteer potatoes were free of the pathogen towards the end of July.

“It is likely that the pathogen was still present below ground, but the environment was not right and the blight did not take off.”

Sensitivity testing of 2020 Fight Against Blight isolates of three key clones (6_A1, 36_A2 and 37_A2) against seven key fungicide active ingredients was run by the team at the James Hutton Institute, led by David’s colleague, Dr Alison Lees.

The controlled laboratory testing on detached leaves and a range of doses as low as 0.4% of field rate did not reveal any significant loss of sensitivity against cyazofamid, amisulbrom, mandipropamid, propamocarb, fluopicolide, oxathiapiprolin or mancozeb.

“Over three years of testing contemporary isolates, we have found no cross resistance or erosion of sensitivity,” said David.

He reminded the industry of the emergence of fluazinam insensitivity in 37_A2 and urged growers to follow FRAG guidelines, keep a check on sources of primary inoculum and consider using varietal blight resistance as pillars of their blight IPM strategy in 2021.

Metalaxyl may have potential place back in blight control

Over recent seasons the shift in UK blight populations has seen a decline in the prevalence of the 13_A2 isolate, which is associated with phenylamide resistance. Fubol Gold (metalaxyl-M + mancozeb) does have a potential role in blight programmes as a highly systemic option, primarily for use during rapid canopy growth, advised Syngenta Technical Manager, Michael Tait.

“However, growers and agronomists should be mindful of the need for resistance management, to avoid any resurgence in the 13_A2 isolate,” he warned.

The best use advice would be that Fubol Gold be restricted to one application per crop, used at the full rate and to consider bolstering with a further protectant blight active in the tank-mix

Watch the presentation from Agronomy Week