Global markets continue to look well supplied overall and with harvests in many major exporters progressing well, confidence is growing. The UK’s relationship to world prices is holding steady for now.

Forecasts continue to show a well-supplied market with large crops. Last week’s storm in the US has added more uncertainty, which is likely to remain until the US harvest reaches Iowa.

Confidence is growing in the size of the EU barley crop as harvest progresses and the grain continues to face strong competition from maize for feed demand.

Grain markets rallied last week despite the USDA increasing its forecast for 2020 US maize production by 7Mt to 388Mt, pushing up 2020/21 global maize ending stocks. A severe storm damaged maize crops and silos in Iowa. The state is expected to account for 18% of US production. Dec-20 Chicago maize futures reached the highest price for a month as a result.

The USDA also cut wheat production in the EU by 4.0Mt and Argentina by 0.5Mt, but this was partly offset by higher production in Russia, the US, Brazil and Ukraine. Global wheat ending stocks also rose but only because of historical revisions.

Russia’s wheat harvest is 57% complete. Following high yields in some areas this morning, IKAR added another 1.0Mt to its crop forecast, now 82.0Mt. There remains some doubt about spring wheat crops, which were impacted by hot weather at grain fill and are yet to be harvested, however, confidence in Russian output is growing.

Stratégie Grains again cut its EU+UK wheat production forecast by nearly 2.0Mt due to poor yield results in France and southeast Europe. At 128.0Mt, production is 13% below 2019. However, good yields and reasonable quality results are reported in Germany and Poland, with harvest in its closing stages.

The EU+UK barley crop was left unchanged by Stratégie Grains, up 3% from last year. Meanwhile, the maize crop was increased by 1.0Mt, despite a sharp drop in French maize crop conditions after hot, dry weather.

Nearly half of the GB wheat area (43%) had been cut by 11 August according AHDB’s second harvest progress report of 2020.

UK delivered prices dipped between Thursday 6 and 13 August, echoing a similar drop in Nov-20 futures prices (£0.60/t) between those dates.

Demand for barley remains limited to the spot market and the UK is not currently competitive for new export business. This could pose a problem for clearing the expected large surplus. If the UK and EU fail to agree a trade deal, UK barley would face high tariffs into the EU from 1 January and limit our export market options.

Northern hemisphere harvests have caused slight price pressure whilst vegetable oil values have weakened. Crop development in Australia and Canada is still a key watch point, along with support for crude oil.

Large US crop predictions have been offset by strong Chinese purchases and the derecho storm which swept across the US Midwest. Once damage is properly assessed this will give a clearer outlook.

The latest WASDE and crop production report posed significant optimism for soyabean supplies, with the US crop now estimated at 120.4Mt, up from 112.5Mt in July’s report.

Despite this bearish news, Chicago soyabeans (Nov-20) closed on Friday at $330.23/t, gaining $11.48/t across the week. Chinese demand has continued to take attention away from expectations of a huge harvest in the US. The USDA reported on Friday that private exporters had sold 126kt of soyabeans to China, marking the 8th consecutive day of Chinese purchases from the US.

Further to that, the derecho storm that swept across the Midwest last week is anticipated to have affected more than 2.3Mha of soyabeans in Iowa, according to the Iowa Soyabean Association. The next USDA crop progress report (out tonight) could possibly give insight as to what damage this storm has caused.

U.S. crude oil shipments to China are expected to rise sharply in the coming weeks as China booked tankers to carry at least 20 million barrels of US crude oil in August and September. Such a large commitment will ease the anxieties surrounding China’s Phase 1 trade deal commitments. Brent crude oil (nearby) closed on Friday at $44.80/barrel, gaining $0.40/barrel across the week.

Malaysian palm oil futures (Nov-20) were down 2.6% from Friday to Friday. This was driven by concerns of a reduction in demand in the first half of August. Exports of Malaysian palm oil for August (1-15) fell 16.5% compared to the first 15 days of July, according to cargo surveyor Intertek testing services. Production is increasing but isn’t being met by demand, pressuring prices.

Sterling weakened (-0.2%) slightly against the euro last week to close Friday at £1 = €1.1048. Prices should have been sheltered. However, as we enter the depths of harvest we may be seeing some harvest pressure combined with a general weakening of global vegetable oil values. 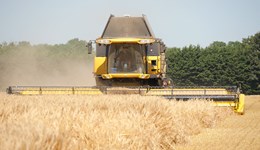