How have nurseries in the Netherlands embedded automation in their businesses? Wayne Brough, Knowledge Exchange Manager at AHDB, went and found out.

If you’re thinking about introducing automation into your business, looking at the production system as a whole will reap much wider rewards than just addressing single tasks.

Nursery production systems have evolved over time in response to an ever-changing range of influencing factors including available technologies, environmental legislation and customer demand. With the increased availability of robotics and automation, many UK businesses have automated a single, or collection of closely related, tasks. A classic example of this has been the rise of the automated transplanter, which has become a standard feature on many nurseries.

But is a better approach to look at the whole nursery production, rather than individual tasks?

That is certainly the case at several large bedding and pot plant nurseries in the Netherlands, which have taken a strategic approach to automating their businesses.

Perry van der Haak is a pelargonium specialist nursery based near NJ's-Gravenzande, where the entire nursery has been designed around automated bench movement.

Within their new 3.2 ha site, the 4,000 production benches are controlled by a sophisticated software system allowing individual bench movement to be controlled throughout production and dispatch, either from the office computer or via mobile phone.

The system, installed by Codema, minimises the time staff spent moving endless batches of plants around. Plants can also move more easily through the various production zones to the dispatch area, which is located on a mezzanine floor in the glasshouse.

This business is like a typical UK production nursery. They have achieved a joined-up approach to nursery automation on a relatively smaller budget. Powered shovel and conveyors move bulk-growing media to the production lines. Transplanting occurs via a TTA transplanter, while a continuously moving chain pulley system, embedded in the concrete paths, automatically moves plants around the nursery on trolleys.

Plants are placed onto beds (and lifted) in bulk by several large, manually operated, powered forks. An irrigation tunnel can water several trolleys of plants at a time, prior to dispatch.

Again, Wouters has taken a whole nursery approach to automation. A buggy or trolley system wirelessly follows a signal cable in the concrete path. A large, bed-sized, spacing machine spaces plants directly on beds. A Danish trolley shelving machine creates the necessary number of trolleys for dispatching the finished product.

Rather than move equipment to beds, at Gebr. Grootscholten, plants on benches are moved to the machines where they are graded and spaced, while still on the benching.

Not all innovation needs to be complex and expensive. This nursery also has home-made mobile seats for staff cleaning floor-grown crops by hand, to help minimise back stress.

Some businesses use intensive automation at key production stages. The young plant producer Beekenkamp has numerous seeding, sticking and gapping-up machines within their production lines, including ‘the next generation’ sticking equipment from ISO Group Agri.

Although their sister company, Deliflor, has used similar sticking machines for years, to stick chrysanthemum cuttings into peat blocks, the next generation robotic arm can now handle a range of different cutting material. The latest model is able to be converted from a sticking machine to a transplanting machine with a change of heads.

Not all automation focuses on the production phase. At Baas Nursery, a prototype box-making robotic arm was being put through its paces on the dispatch line, prior to potential commercial installation.

Wayne visited these nurseries during the SmartHort and Bedding and Pot Plant Centre automation study tour group, organised by AHDB and BOPA, in September 2019. Many thanks to all the nurseries for hosting the tour. 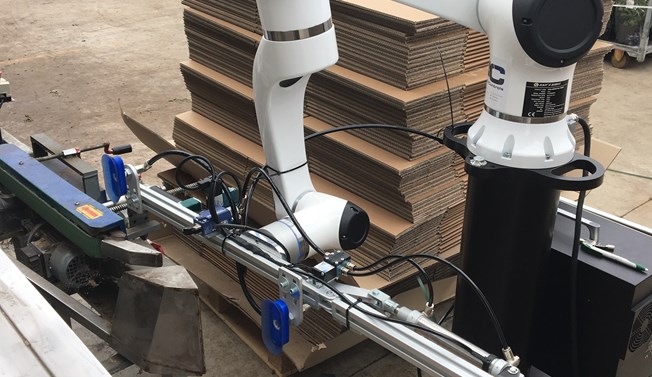 Automation and robotics in the Netherlands - pictures