Ethylene is a plant hormone that inhibits sprout elongation once sprouting has naturally initiated. Research has shown that performance varies significantly between varieties, as some are more responsive to the hormone than others. As a result, ethylene is more effective at lower temperatures (< 5 °C) and is therefore more widely used to control sprouting on potato varieties destined for the fresh pack market, such as Nectar and Melody. Unlike CIPC, ethylene usage as a sprout suppressant is not governed by a Maximum Residue Level (MRL) threshold and because it has minimal residual effect, sprouting can resume just a few days after removal from storage, which can be a disadvantage for shelf life.

Controlling sprouting with ethylene has proved less popular with potatoes destined for processing. That is because, in addition to inhibiting sprout growth, ethylene can also increase respiration in tubers. The resulting accumulated sugars have an undesirable effect on fry colour, which varies significantly between varieties. To provide levy-payers in the processing sector with more sprout suppression options, the AHDB funded a research project to investigate the use of ethylene in combination with CIPC on the major processing varieties and to provide practical recommendations.

A gradual increase to 10 ppm of ethylene and subsequent maintenance at this concentration was sufficient to reduce sprouting to commercially acceptable levels for six months in Markies and Russet Burbank, but not Maris Piper. Ethylene treatment had an effect on fry colour but was within commercially acceptable limits for Maris Piper, Markies and Russet Burbank. A single dose of CIPC (9–16 g/t) prior to ethylene application proved more effective than either treatment alone and points towards a synergistic effect between both treatments.

Research so far has demonstrated that, while effective sprout suppression with ethylene as a lone treatment or in combination with CIPC can be achieved for fresh market and processing varieties, not all varieties respond effectively. As a store manager, make sure to consider this varietal component when using ethylene to control sprouting and to closely follow suppliers’ guidelines.

More research into ethylene and other alternatives are currently underway, as previously reported in the July and September issues of the Storage Bulletin. Read the full report on using maleic hydrazide as a sprout suppressant.

More information on application and how ethylene compares to other sprout suppression options can be found in the third edition of the Potato Store Managers’ Guide.

If you are interested in testing out ethylene in your own stores, contact our sprout suppression specialists free of charge on the Storage Advice Line 0800 0282 111 or email us at sbcsr@ahdb.org.uk 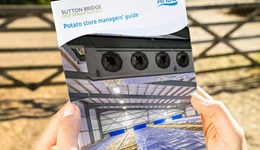 MH provides stability to a sprout suppression strategy – especially over the loading, drying and pull-down periods, and is therefore a ‘must-have’ component of control strategies in European processing stores

A new monthly podcast from AHDB Potatoes will be bringing you a round up of the latest news from across the potato industry.