How to identify spotted wing drosophila

Lessons from other affected countries have shown the best approach to managing and minimising the potential impact of SWD is an integrated management programme of early crop monitoring, early control, scrupulous hygiene and housekeeping and thorough disposal of damaged fruit combined with targeting spraying of approved, effective crop protection products.

Picking and handling right through to the end of the season

It is vital that every effort is made to implement control measures from the start of the season to reduce population numbers in the crop. However, should recourse to crop protection products be required, growers must be mindful of the maximum number of applications permitted for a product and not exhaust these before populations of the pest reach peak levels during the harvest period. The peak in the population of SWD varies from year to year depending on the severity of the preceding winter, but the pest is always likely to be present in low numbers from the start of the season.

Increasing the number of harvests per week, or harvesting earlier will leave the fruit less vulnerable to attack.  In Italy, picking cherries earlier has reduced the scale of the problem considerably.

Sorting fruit after harvest is also an option, but this is labour intensive and may not be commercially viable for raspberries or strawberries. 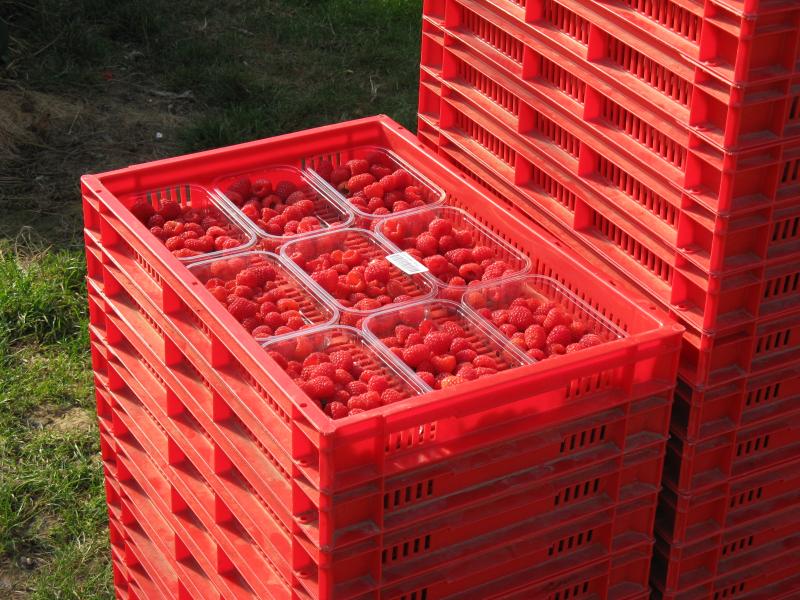 In its native country, Japan, SWD has associated parasitoids. Unfortunately, these species are not found in Europe (although some closely related species are). It is possible that parasitoids of UK Drosophila species may adapt to parasitising SWD, but this method of control will not be effective in the early years. Predatory insects could include Atheta and Orius, but more research is needed on predators, parasitoids and pathogens of SWD which could be used effectively in the UK.

Most crop protection products are targeted against the adults as the eggs and larvae are protected inside the fruit. Once numbers build up in the crop, it can be difficult to achieve complete control of the pest. The most effective method for targeting sprays is by monitoring and close consideration of the ripening of the crop, but consideration will need to be given to natural enemies used in IPM strategies. It is always best to instigate biocontrol programmes very early in the season to gain control of other pests before using crop protection products for SWD which may be harmful to natural enemies and introduced predators.

In research project SF 145, scientists at NIAB EMR field tested the effects of different crop protection products on SWD control. They looked at the effects of products both for direct control of adult SWD and the duration of control achieved by treating the crop before SWD adults attack developing fruits.

In the first year of the research work (2013), a protected strawberry crop was treated with a range of crop protection products close to harvest. Fruits were assessed by picking at intervals post spraying, exposing to SWD adults and then incubating for three weeks to determine the numbers of SWD produced. Fruits were assessed up to two weeks after insecticide application to determine any effect of residue decay. Spinosad (Tracer), a coded product, subsequently revealed to contain cyantraniliprole (Exirel or Benevia) and chlorpyrifos (Equity), controlled SWD for up to two weeks after spraying. Spinosad and chlorpyrifos, in particular, have direct effects on adult SWD. Lambda-cyhalothrin (Hallmark) gave very short and variable control of SWD – up to two days. Spruzit (pyrethrin + rapeseed oil) gave up to 50% efficacy against adult SWD and persisted for approximately 2–3 days, depending on environmental conditions. Neither chlorantraniliprole (Coragen) nor deltamethrin (Decis) effectively controlled SWD in this strawberry trial.

A similar trial was done in the second year (2014) with an unprotected raspberry crop to test the effect of crop protection products on SWD emergence from fruit. All products were compared to an untreated control. Of the tested products, Equity, the coded product and Tracer gave at least seven days protection. Calypso and Gazelle also reduced numbers emerging for up to two weeks by around 60–80%. Hallmark, Coragen, Bandu, Dynamec and Spruzit did not provide any significant control in this particular raspberry trial.

AHDB has reviewed the literature on potential dead-end hosts of spotted wing drosophila (SWD). These are plants that produce soft-skinned berries which are attractive to adult female SWD for egg-laying, but are not conducive to egg hatch or larval development. They offer a potential way of diverting adults away from fruit crops and reducing or slowing population development of the pest.

Studies in the USA, Italy and other countries have demonstrated that insect exclusion mesh erected over crop tunnel structures are able to reduce the numbers of adult SWD entering a crop area. In trials, the exclusion mesh has led to significant reductions in the populations of adults, larvae and eggs of SWD compared to ‘unmeshed’ crop areas. However, the side effects of exclusion mesh, and particularly its impact on beneficial and predatory insects and disease pathogens, have not yet been quantified in the UK.

PhD student Nick Buck is undertaking a study at the University of Reading as part of the Waitrose CTP Studentship Scheme which is being supported by BerryWorld and NIAB EMR. The latest findings are summarised in an article written in December 2020.

In every season in the UK since 2014, SWD larvae have occurred in many soft and stone fruit crops and where the pest has not been adequately controlled, it has caused significant damage to cherry, strawberry, raspberry, blackberry, blueberry and vineyard crops. As a result, each season, all growers of these crops should prepare to start an early season monitoring programme for the pest from March onwards, using Droso Traps with ‘Dros Attract’ or ‘Gasser’ bait. This is especially important given that there can be several generations per year as the full life-cycle takes only 12–15 days to complete when temperatures are 18oC, and if populations are allowed to increase over the season, then fruit damage can occur.

Further information can be found in: