The function of soil biology

Soil is full of life. Find out about different groups of soil organisms and their roles in nutrient cycling, stabilising soil structure, water infiltration and interactions with plant roots.

Soils contain a very high diversity of organisms, including bacteria, fungi, protists, nematodes, collembola and mites. A gram of soil contains one billion individual bacteria and as many as ten thousand different bacterial species.

These soil organisms interact with one another and the chemical and physical properties of the soil to drive soil processes:

Soil management that supports a healthy and diverse soil biological community will give more effective and resilient regulation of soil function. The physical structure of soils (air/water balance) and the chemical environment (pH, nutrients) provide the habitats for roots and soil organisms to interact.

Watch this short video to learn more about soil biology. 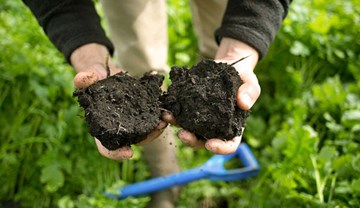 Helping you protect your soil and improve its productivity.

Soil organisms can be grouped by the roles they play and the processes they carry out. One of the most common groupings of soil organisms is according to what they eat.

Learn more about nutrient cycling in the soil food web

Read about how soil organisms shape their world

Macrofauna are larger animals such as moles, earthworms, ants, millipedes, spiders and beetles. These are often considered to be the structural engineers of the soil, creating aeration and providing channels for root growth.

Find out more about ecological roles of earthworms

The activity of microfauna such as protists and nematodes releases nutrients that plants can use. Nematodes are a diverse group, including plant parasites and predators that feed on bacteria, fungi or other nematodes.

Microorganisms include bacteria, fungi and viruses. They perform a variety of key soil functions, including nutrient cycling and soil stabilisation. Bacteria and fungi that interact directly with roots can affect plant health and/or productivity in a positive way (e.g. mycorrhizal fungi) or a negative way (e.g. plant pathogens). Viruses can be transmitted by plant-feeding nematodes or certain fungi that infect plant roots.

Find out more about soil microbiology in agriculture